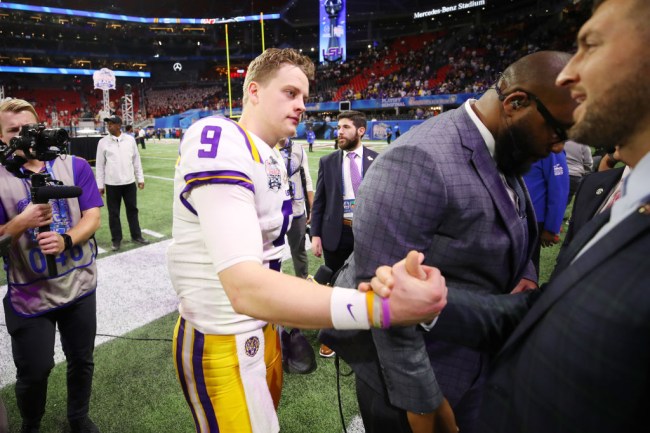 Just hours before LSU and Oklahoma were set to do battle in the Peach Bowl tragic news came out of Lafayette, LA as a small plane had crashed en route to the game in Atlanta. Five people tragically lost their lives and one of those five people was sports reporter Carley McCord, the daughter-in-law of Steve Ensminger who is the Tigers’ offensive coordinator.

BREAKING: ESPN sideline reporter & @wdsu sports reporter @CarleyMcCord was 1 of 5 people killed in a plane crash, today in Lafayette, LA. The pilot was taking passengers to the LSU game in Atlanta. McCord's father-in-law is offensive coordinator for LSU. https://t.co/TsHxlqiPsY

Ensminger went on to coach his LSU offense from the booth helping lead the Tigers to a dominant 63-28 win over the Sooners. While some of his players embraced him during warmups knowing of the news, it turns out that not everyone on the LSU team knew about McCord’s passing.

During a postgame interview with ESPN and the SEC Network, Dari Nowkhah brought up the horrible news asking how the team overcame it out on the field. The question completely caught Burrow off guard as he said ‘oh my gosh, I didn’t know that’ as it was the first he had heard of the news.

Yikes. Dari Nowkhah broke the news of the plane crash to Burrow live during a postgame interview. Burrow ended up handling it well, and it had been talked about so much on the broadcast I don't really blame Dari for figuring the team knew. pic.twitter.com/IID00JLuJC

Nowkhah obviously believed that Burrow and likely the entire LSU team knew about the plane crash as players were embracing the offensive coordinator prior to the game, but it doesn’t make this segment any easier to watch.

On one hand Nowkhah is doing his job, maybe even had a producer in his ear telling him to bring it up and is likely after a soundbite from the Heisman Trophy winner on the tragic news, but on the other hand, it may have been best to keep that news away from this moment and not assume anything.