Joe Burrow Screams In Pain After Suffering Nasty Pinky Injury, Stays In Game Like The Beast He Is 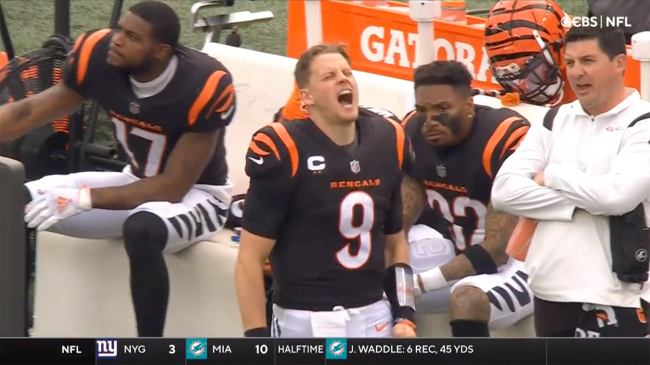 Joe Burrow is a DUDE. The 24-year-old Cincinnati quarterback suffered a nasty injury to his finger in the first half on Sunday but elected to stay in the game.

With less than three minutes left in the first half, Burrow took a broken play draw up the middle for six.

Apparently, at some point during the run or on the drive, he injured the pinky on his throwing hand. Burrow was clearly uncomfortable as he went to the sideline and it was easy to see why.

His pinky finger was bent in the entirely wrong direction.

After bringing his hand to the training staff, Burrow had his finger wrapped. But he didn’t like the wrap job, ripped it off and tried to work through it.

Joe Burrow seems to have an issue with his pinky finger on his throwing hand. They wrapped it. He didn’t like the wrap and ripped it off. He was visibly unhappy with the situation. He’s throwing on the sideline without anything on it to see how it feels. https://t.co/GZfHa9JpPz

Burrow then opted for a smaller tape job to provide some sort of stabilization. It just didn’t appear to help very much as he went through some warmup throws on the sideline. He was in agonizing discomfort.

Joe Burrow is dealing with a pinky injury..pic.twitter.com/jCGNMUMYuF

Despite the significant amount of pain, Burrow decided that it was easier to play without any sort of tape job. He went back into the game just before halftime without his finger wrapped and it did not look right.

Burrow stayed in the game after halftime and led two consecutive scoring drives. He was clearly uncomfortable but played through the pain.

Burrow went 17-of-24 for 198 yards, one touchdown and one interception through the first  42 minutes, which is impressive considering his ailment.