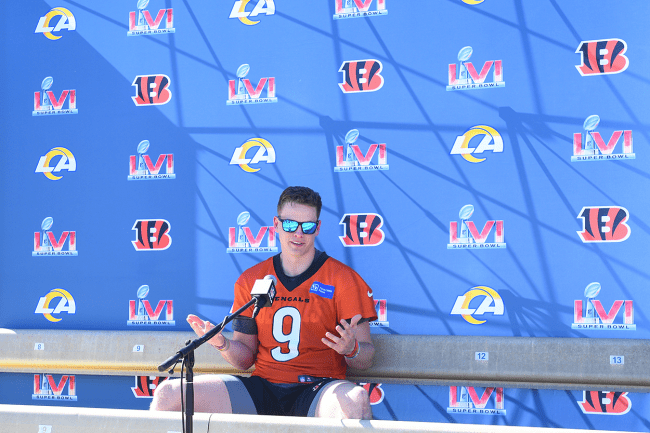 Joe Burrow is like Michael Scoot. He says that he isn’t superstitious, but he is definitely a little stitious.

As the 25-year-old quarterback tries to lead the Bengals to their first-ever Super Bowl win, he is keeping with his unique sock tradition. Where most people would wear their socks outside-out, Burrow wears one of his socks inside-out. He says that it’s not a superstition, but it’s definitely a superstition.

Yes, Joe Burrow always wears one sock inside out. But no, he said, he wouldn’t call himself superstitious. “It’s just something I’ve always done,” said the #Bengals QB. pic.twitter.com/gQLI3s8KIR

The quirky tradition actually began out of laziness. When Burrow would wash his socks, he didn’t want to take the time to flip them out the right way, so he just started putting on his socks however they came out of the drier and the inside-out left sock thing just stuck.

Left sock inside out for Joe Burrow. 👍 pic.twitter.com/nzCdyeueBX

It is not his only superstition that he does not call a superstition. While at LSU, he would enjoy a caramel apple lollipop on the bus prior to the game.

Although it is not clear as to whether the pregame ritual continued onto the NFL level, it definitely did. He says that he has plenty of suckers left.

It started because the girl who asked him to prom in high school asked him with a few bags full of them. Now it’s just a thing.

Why does he like caramel apple suckers so much?
Why does he wear one sock inside out?
Who does he look like?#LSU Joe Burrow entertains. pic.twitter.com/fssPxfQGYP

Burrow can say that neither the sucker nor the sock is a superstition, but there is no way that he would stray from either after winning a national championship and reaching a Super Bowl in less than three years. It’s a superstition.