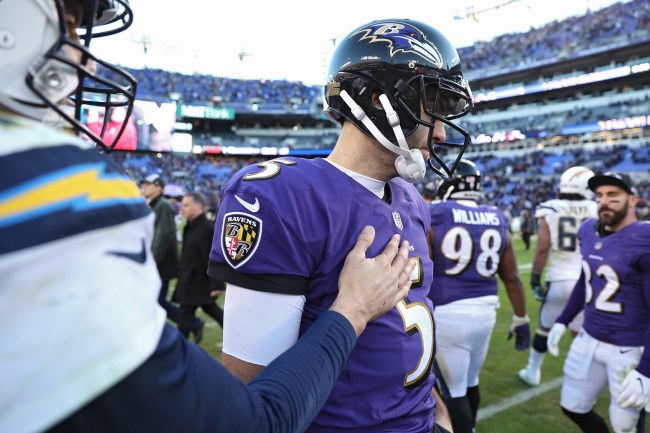 Joe Flacco is, arguably, the best quarterback the Baltimore Ravens have ever had, having helped guide them to a Super Bowl victory just six years ago. But, after the team selected former Heisman Trophy winner Lamar Jackson in the first-round of last year’s NFL Draft — then started the rookie in favor of Flacco as they made a run into the postseason — the writing was on the wall that the former Super Bowl MVP’s days were numbered.

Today became the final day for Joe Flacco on the Baltimore Ravens, because, according to Adam Schefter, the team agreed to a trade that’ll ship him off to the Denver Broncos once the new league year starts on Wednesday, March 13. Here are some details from Schefter about the Joe Flacco trade.

New Broncos HC Vic Fangio spent one season in Baltimore while Joe Flacco was Ravens’ QB and knows what he will be getting. Former Broncos’ exec Gary Kubiak also was a Flacco fan, and has mentioned how much he liked the soon-to-be Broncos’ quarterback. They were strong selling pts

In a piece he wrote for ESPN about the trade, Schefter also reported that there the trade compensation for Joe Flacco is still unknown, but projected that, given the Broncos draft assets, he could warrant a fourth-round pick in return to the Ravens.

Denver does have two fourth-round picks — its own and the one acquired from the Houston Texans in exchange for wide receiver Demaryius Thomas. Whatever the compensation turns out to be, Flacco will be playing in Denver, where he had a huge role in the “Mile High Miracle” in January 2013 — a 70-yard touchdown pass to Jacoby Jones that sent the AFC Divisional Playoff game into overtime. The Ravens went on to win the game in double overtime en route to winning the Super Bowl.

Given the success Joe Flacco had during his time in Baltimore, Twitter had jokes — and a lot of them were aimed at John Elway for picking up an aging quarterback making over $10 million. Here were some reactions from people on social media after finding out about the trade.

Given Lamar Jackson’s instant success, however unorthodox, last season, Joe Flacco was going to be shipped off at some point this offseason for a chance to land a starting gig somewhere. The fact that the Ravens did it prior to next season’s league year even starting is a better gesture than having him hang around for a few months with the team, then trade him — so this is actually doing Flacco a favor, as it gives him more time to learn a new system.