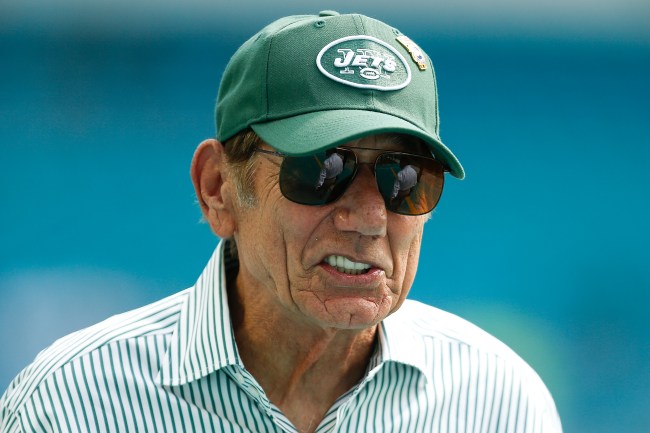 Joe Namath is as legendary for his outlandish personality as he is for his football career. Sure, the former New York Jets quarterback might be in the Hall of Fame, but the dude’s crowning moment was predicting his team would upset the Baltimore Colts in Super Bowl III, which all but created the legacy of “Broadway Joe.” Other than that, though, Joe Namath’s NFL stats were actually underwhelming AF.

But the flamboyant Namath has always been one to create attention, whether that’s a good or bad thing. From doing risque commercials and parading around the Big Apple back in the ’70s, to lending support for the Jets as the now 75-year-old slows things down a bit more, Joe Namath is a certified stickman who has tons of stories. But there’s one that he would rather forget.

We all know which one that is, right? It’d be the video of a drunken Joe Namath telling ESPN reporter Suzy Kolber in 2003 that he wanted to kiss her in front of a national TV audience, which, for young people, has been the one moment that really stands out about the Jets legend.

The video, even before the Internet was what it is now, became viral, with Joe Namath looking like the creepy old dude who just hit on a younger woman. It was at that moment that Namath says he stopped drinking, giving a few reasons why it was a turning point in his life.

“I saw it as a blessing in disguise,” says Namath, who admitted to being drunk during the interview. “I had embarrassed my friends and family and could not escape that feeling. I haven’t had a drink since.

“That shame is where I found my strength to deal with the addiction. With the help of my recovery, I learned that I had used my divorce as an excuse to go back to drinking. That knowledge made me a stronger individual.”

At the behest of his then-wife, Deborah, Namath says he saw a psychologist in Brentwood, California, because of his drinking. But after each session, he says, he’d stop at a liquor store and buy a pint of vodka.

“I thought I could get away with that, but she could smell it,” he says.

They were divorced in 2000, which exacerbated the problem, Namath says.

“The drinking was what would kick my butt for a long time,” he says. “I believe any of us can be brought to our knees whether from physical or emotional pain. Over the years, I learned how fragile we humans can be. Emotionally, I used that as an excuse to start drinking again. … I would drink all day sometimes.”

Joe Namath, who offers up more stories about his life and battle with alcohol in his new book “All the Way: My Life in Four Quarters,” which hits bookstores this week, also detailed how he used to frequently stay out till 3 a.m. on weekdays during the season, hitting Manhattan clubs and living up to his lady’s man persona.

“I was in my early 20s when this fame hit, living in one of the sexiest cities in the world,” he says. “So it felt natural to turn toward it and not shy away. I enjoyed the company of ladies and, man, were there a lot of places servicing the singles crowd.”

If there’s a guy who has stories to tell for days, it’s Joe Namath, so the book has to be an interesting read.