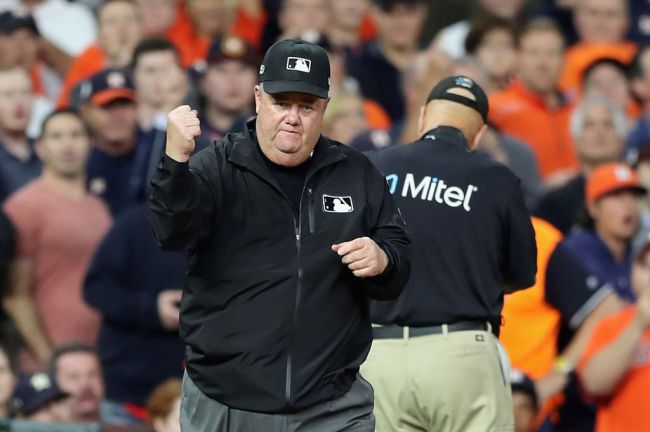 Major League Baseball umpire Joe West, known by some as “Country Joe” or “Cowboy Joe,” is the longest tenured umpire in the game. With his first game of the 2015 season, he surpassed the mark of 37 years held by umpires Bruce Froemming and Hall of Famer Bill Klem, and has continued on to join them as the only three to officiate more than 5,000 games at the big-league level. West sits only 59 games behind Klem’s 5,369-game run and is on pace to break the record for total games.

West has become a staple of the game throughout his long career and has been a part of the greatest and most historic games in MLB history, as well as some of the biggest spats and feuds. He was suspended in 2014 after initiating contact with Jonathan Papelbon, and again in 2017 when he told the media that Adrian Beltre was the sport’s biggest complainer— and West’s track record of incidents don’t stop there. His in-your-face style has certainly ruffled some feathers, but whether you love him or hate him, he’s worked under six of the 10 Commisioners in MLB history and doesn’t appear to be slowing down.

His most recent dispute was settled by New York Supreme Court Justice John J. Kelley on Monday and the 66-year-old West is $500,000 richer.

Former MLB catcher Paul Lo Duca, who spent 10 years between the Dodgers, Marlins, Mets and Nationals, addressed West on “The Favorites” podcast in April of 2019. West contended that Lo Duca said that he had been ejected 15 times during his major league career and eight or nine had been by West.

West brought receipts and his defamation lawsuit against Lo Duca stated that he was ejected just eight times in his career and only once by him. In addition, the suit rejected Lo Duca’s bribery claim.

On the podcast, Lo Duca said that West agreed to give his New York teammate Billy Wagner a bigger strike zone in exchange for us of the pitcher’s car.

“We’re playing like a really tight game against the Phillies and Billy Wagner comes in from the bullpen,” Lo Duca said. “I used to go to the mound every time and like, ‘What’s going on?’ and he’s like, ‘Hey, Joe’s behind the plate. Set up a couple more inches inside. I was like, ‘Are you kidding me? Joe hates me.’ He’s like, ‘No, no, no, no, no, no. Joe loves me.’

“I go, ‘He hasn’t given us the corner all day.’ He’s like, ‘Don’t worry about it.’ He literally throws 10 pitches and strikes out three guys. Joe rings up all three guys. Eight out of the nine pitches were at least three to four inches inside, not even close. Guys were throwing bats and everything. Joe walks off the field …

“I get back into the clubhouse and I’m like, ‘What the f— just happened just right now?’ And Wagner just winks at me. I’m like, ‘What’s the secret?’ He’s like, ‘Eh, Joe loves antique cars, so every time he comes into town I lend him my ’57 Chevy so he can drive it around so then he opens up the strike zone for me.’”

West vehemently denies the allegation and took the catcher to court, stating that Lo Duca’s comments could hurt his changes of making the Hall of Fame. As the case unfolded over the past two years, it was established that West was only the home-plate umpire once in a game where Lo Duca and Wagner played together in New York during the 2006-07 season. However, Wagner never pitched that game.

The court sided firmly against the catcher and in favor of the umpire, awarding West $250,000 for “past mental anguish and emotional distress” and another $250,000 to “compensate for expenses he will need to incur in retaining a public relations firm to formulate and operationalize a sufficient reputation remediation plan.”

We may never know if Lo Duca’s story has any basis, but if he was on the losing end of this suit, it sounds like he just made it up for the story and didn’t expect the ramifications. When it’s all said and done, which it appears to be, a podcast appearance on April 18, 2019 cost Lo Duca $500,000. Even if his net worth is in the ballpark of $30 million, that’s not a small chunk of change. Tough.