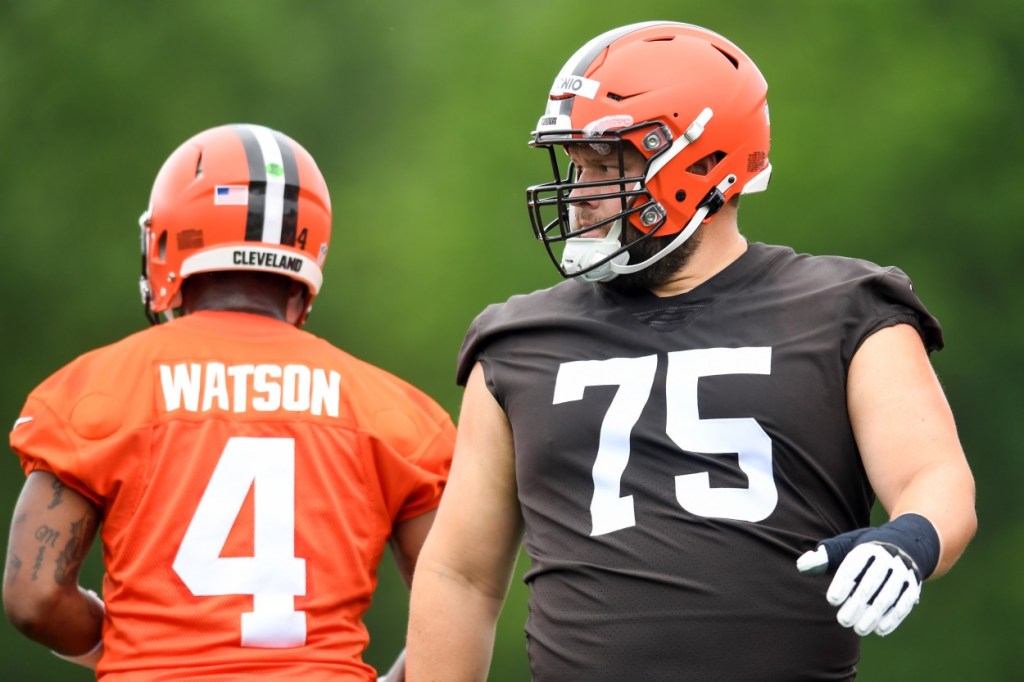 After the Cleveland Browns played the Jaguars on August 12th and were booed mercilessly by Jacksonville Jaguars fans, it became glaringly obvious this was going to happen to the Browns all season. The entire team will answer for Deshaun Watson’s accusations in the eyes of opposing NFL fans, at least when it comes to boos.

The boos rained down on the Cleveland Browns in Jax and after the game, offensive linemen Joel Bitonio formerly of the Nevada Wolf Pack football, would tell Chris Easterling of the Akron Beacon Journal “you know, I think once Deshaun came out of the game we got booed less, but you go to a road game they boo you anyway, so you know what I mean? So we’ll see how it goes. I’m sure, it seems like more than ever, Cleveland against the world, so we’ll be ready for it.”

Every team in the NFL gets booed by opposing fans but this season and subsequent seasons will be different for the Browns. It’s never been ‘Cleveland against the world’ until now, until Deshaun Watson’s arrival, because Cleveland has rarely been good enough for most opposing fans to take them seriously.

Joel Bitonio was asked about the backlash of his ‘Cleveland against the world’ comments by reporter Mary Kay Cabot. Based on his response, he’s definitely heard what people are saying but he tried to clarify that his comments were taken out of context.

Joel Bitonio: “Yeah, I noticed it. I noticed, and what I said was, we’re going to go to stadiums and we’re going to get booed by people no matter who’s playing quarterback for us and as a team we come out and say ‘Cleveland against the world.’

“If people want to take that in the wrong context or talk about it in the wrong context, that’s their opinion but I know we have good people on this team that are working hard and trying to be the best for the Cleveland Browns and that’s where I am at as a player who has been here for nine years, and if someone wants to think that I don’t love and appreciate things in my life, that’s their opinion.”

“But I know where I’m at and where I’m at with Cleveland and the people on this team. I’m sure every stadium we go, we’ll be booed. I don’t know if it will get worse. I think people get tired of booing, you know? But I’m sure every time he goes out there, there’ll be some sort of boo to start the game and we’ll kind of go from there. . . . I think once Deshaun came out of the game we got booed less but you go to a road game, they boo you anyway, so you know what I mean? So we’ll see how it goes.”

How will this season go for the Cleveland Browns?

It’s hard to get a handle on how most Cleveland Browns are feeling heading into this season with Deshaun Watson. I’ve got some close friends who are Browns fans but that’s entirely anecdotal.

My sense is Cleveland’s fanbase would’ve preferred to not throw the largest guaranteed contract ever at someone who would bring this scrutiny on their team all after the guy hasn’t played a game in what seems like forever.

It’s probably time to retire the phrase ‘Cleveland against the world’ now that a large chunk of the fanbase feels conflicted about even rooting for the organization. The team’s projected win total over/under this season is 8.5 games. Are fans even rooting for a great season? Do they want to see an 11-game win streak followed by Deshaun Watson going winless? Or will Deshaun be fully embraced by the fanbase when he returns from his suspension? Only time will tell.