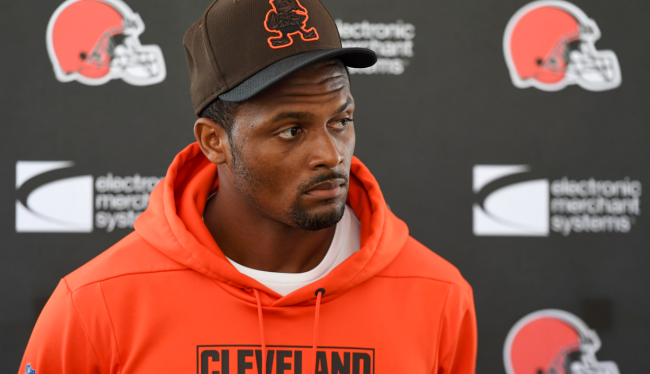 It was announced on Thursday that after their appeal of his initial six game suspension, the NFL will officially suspend Deshaun Watson for 11 games and fine him a record $5 million.

Many football fans still didn’t believe that was enough punishment after more than two dozen women claimed Watson had inappropriate sexual contact with them.

Then, just to make matters even worse, Deshaun Watson issued a statement on Thursday in which he said he apologizes for “any pain this situation has caused” and still maintained his innocence when meeting with the media following the NFL’s decision.

Watson also said he empathized with the many people who were “triggered throughout this process.”

“We…understand that there have been many individuals triggered throughout this process.” – the Haslams a few weeks ago

The tone was set from the top. https://t.co/HWDQN1zi13

As if that wasn’t enough to roil NFL fans, Cleveland Browns owner Jimmy Haslam took things a step further into the abyss.

Speaking with the media on Thursday, Haslam said, “I think in this country, people deserve second chances. Is he never supposed to play again? Is he no longer supposed to be part of society? That’s what we’re going to do. We gave Kareem Hunt a second chance and that worked out pretty well.”

When called out for claiming this was all about giving Watson a second chance, Haslam then did admit, “You can say that’s because he’s a star quarterback. Well, of course.”

On top of that incredible statement, Browns general manager Andrew Berry, when asked if he would still have traded for Watson knowing what he now knows, replied, “Yes we would and we mentioned at the time that our process was thorough and we made an informed decision. We understand why others might not have made the same decision that we did. But we do believe that Deshaun has strong, positive qualities. And we do think that he’s done everything within his power to integrate himself with our team and he’s done everything that we have asked.”

Many NFL fans simply could not believe how tone deaf Haslam, Berry and the entire Browns organization is being in the face of Watson’s monumental punishment.

So very tired of this "BUT HE CAN DO SPORTS WELL" excusing of reprehensible behavior. https://t.co/qJrgVrYIDU

It’s very clear that Jimmy Haslem, Andrew Berry and Watson have learned nothing from this entire controversy.

This press conference is…something else