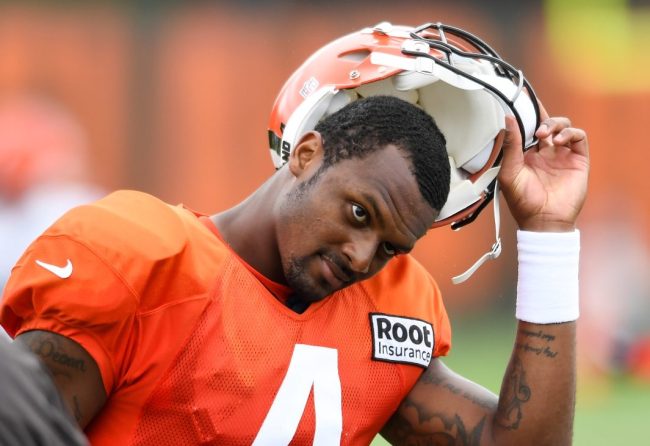 The NFL has officially given Deshaun Watson an 11-game suspension. The Cleveland Browns quarterback is now due back in Week 13 where he just so happens to face off against the Houston Texans. After the punishment was dealt, Watson immediately left a statement that has fans absolutely shredding him apart.

Adam Schefter shared the exact statement the Browns quarterback made. He claims he’s “grateful for the disciplinary process” to be done with. Additionally, Deshaun Watson apologizes for “any pain this situation has caused” rather than apologizing to the victims.

Simultaneously, Watson continues to beat the drum that he’s innocent, per Ari Meirov.

Deshaun Watson says just because he settled the cases and agreed to this suspension doesn't mean he's guilty of anything or did anything wrong.

He just wanted to move on from everything.pic.twitter.com/obTWAK2PL9

Even the owners of the Cleveland Browns left a statement regarding Deshaun Watson’s 11-game suspension.

Considering Deshaun Watson allegedly sexually assaulted well over 20 women, many are still upset with him and the Browns organization. After leaving a rather generic statement about the entire situation, NFL fans couldn’t help but roast him.

“I take accountability for the decisions I made” 🤢🤢🤢🤢

Heard this was a rough draft of their new helmets! pic.twitter.com/xq6HFAZXgL

Sexual abuser of multiple women and got less than a guy who placed a few bets????

NFL fans and some Browns fans are just sick to their stomach with Deshaun Wastons’ actions. His statement doesn’t help either. Look for Cleveland to attempt to keep Watson out of the spotlight for the next several weeks. That’s the best move the franchise can make right now, but it’s hard to imagine the uproar dies down.