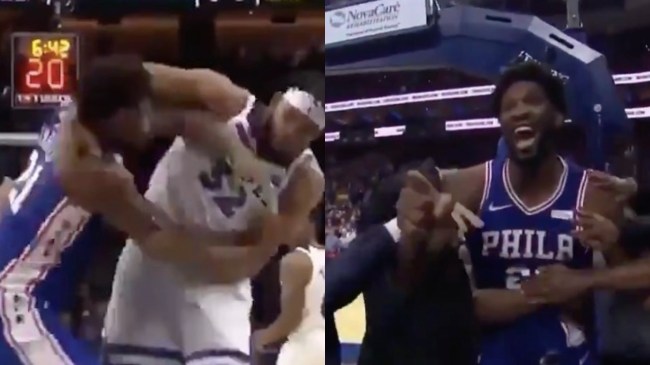 While it may only be the fourth game of the 2019-20 NBA regular season, some of the league’s teams are already in midseason form, as Joel Embiid and Karl-Anthony Towns threw punches during Wednesday’s night game between the Philadelphia 76ers and Minnesota Timberwolves in Philly.

Obviously, both Towns and Embiid were tossed from the game following the altercation.

After Embiid and Towns got into it, the scrap continued, with Ben Simmons ending up on the floor holding Towns in a chokehold.

AND WE HAVE A KAT TAP OUT VIA BEN SIMMONS CHOKE HOLD IT’S NO HOLDS BARRED HERE IN PHILLY pic.twitter.com/OiFgBCyaex

Embiid, always such a showman, made sure to gas up the crowd on his way out, as he had a quick shadowboxing session on the sideline before exiting the court.

Joel Embiid had Philly in a frenzy moments after being ejected. pic.twitter.com/7UJKheYHMs

The Lakers and Rockets threw punches at Staples 😳 pic.twitter.com/YKWRkqHnXF

Both the Philadelphia 76ers and the Minnesota Timberwolves resume their season on Saturday, as the Sixers will take on Damien Lillard and the Portland Trailblazers in Oregon, while the Wolves will host the Bradley Beal and the Washington Wizards in Minneapolis. It’s safe to say that neither team will have the services of their various All-Stars the next time they take the court.