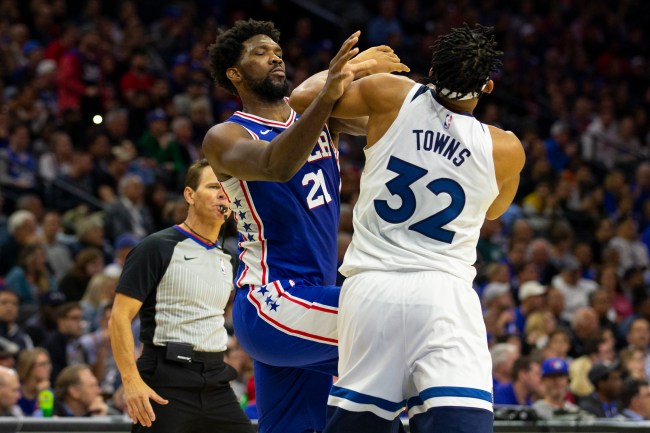 During Wednesday night’s game between the Sixers and the Timberwolves, centers Joel Embiid and Karl-Anthony Towns got heated and started fighting in the third quarter.

Both Embiid and KAT were ejected from the game following the fight which led to this mini-celebrstion from the Sixers center.

Joel Embiid out here shadowboxing like he's Ali after getting ejected loool pic.twitter.com/kzTGyzcPTU

Things got so heated that even KAT’s mom tried to fight Embiid while he was riling up the crowd.

KAT’s mom wanted to fight Embiid in the tunnel💀pic.twitter.com/wwKUz8IQHF

During the Sixers’ postgame press conference, Embiid had a NSFW explanation about his fight with KAT.

Joel Embiid on fight with KAT 'I ain't no bitch" pic.twitter.com/EOp1ijj0xm

He went on to mock the Timberwolves center by reminding about that time Jimmy Butler called him soft.

Great team win!!! I was raised around lions and a cat pulled on me tonight lmao.. Got his mama giving middle fingers left and right. That’s some SERIOUS REAL ESTATE #FightNight #IAintNoBitch pic.twitter.com/MWc9p0jy7u 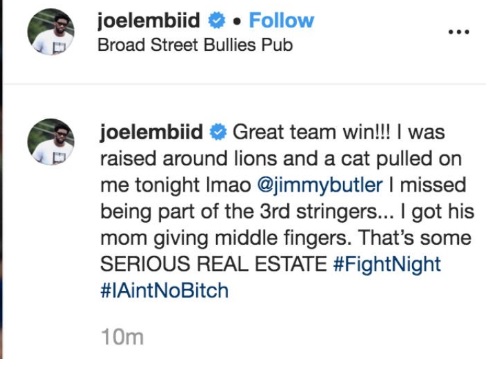