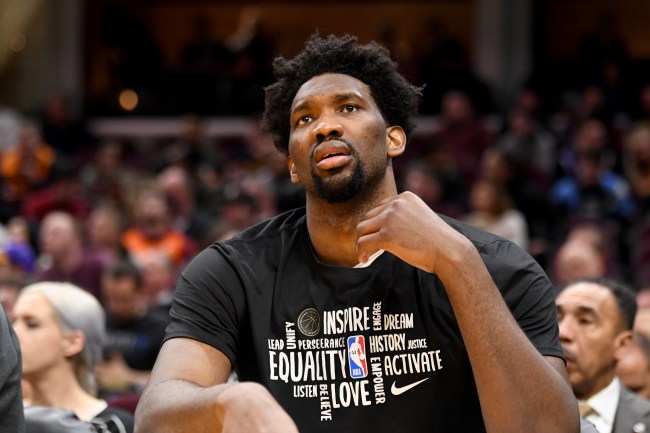 With the competing teams set to arrive in Orlando and enter the NBA Bubble this week, every single player is taking precautions to make sure they stay safe from contracting the coronavirus. After all, not only are pro athletes trying to avoid getting sick — which could eliminate them from competing in the league’s restart and have long-lasting, unknown effects on their bodies — but no player wants to be the guy who “bursts the bubble” by bringing the virus to his team’s locker room or onto the court.

Well, Philadelphia 76ers center Joel Embiid seems to be going the extra mile when it comes to being safe — and it’s on a whole different level.

As Embiid’s team boarded a flight to the NBA Bubble, the big man was spotted wearing a full hazmat suit and mask, going to extreme measures to protect himself from any germs. It might be unconventional, but, hey, if it keeps the All-Star from getting sick, nobody will be laughing. Take a look at the pic below.

Joel Embiid has arrived for the flight to Orlando, in full mask, suit and glove gear. pic.twitter.com/Nz7hOtc69E

Joel Embiid’s concerns shouldn’t be mocked, but, damn, it’s hard to imagine anyone is this freaked out about contracting the virus. If he’s wearing this now, what’s going to happen when he needs to don a jersey and mesh shorts out on the hardwood? Will he still be hesitant to be around so many other people without such protection? We’ll have to wait and see.

The image of Embiid comes on the same day that ESPN’s Kendrick Perkins mocked the center for being so scared of contracting the virus — which is kind of bullshit, in my personal opinion. Who’s Perkins to judge Embiid for being a little hesitant? With players legit pulling out of the NBA restart, he’s at least going down to Orlando to play; he may just be going next level with protecting himself while traveling.

Anyway, once people saw the Joel Embiid image on Twitter, people had a bunch of jokes; so take a look below at what some were saying.

Joel Embiid leading the Sixers onto the court. pic.twitter.com/1fWWXZWQTx

Embiid at the first Sixers practice in Disney pic.twitter.com/1Img4EXE7g

I actually think he's dead serious. This echoes his statements from the other day .

I don’t know if Jo is trolling or that serious about the virus. And that’s what makes this so great 😂

Yo, real talk: Good on Joel Embiid for playing it safe. Sure, the whole hazmat suit might just be a bit of a joke and used to get some attention, but, hey, if it decreases his chances of catching the virus, maybe more NBA players should consider following his lead.