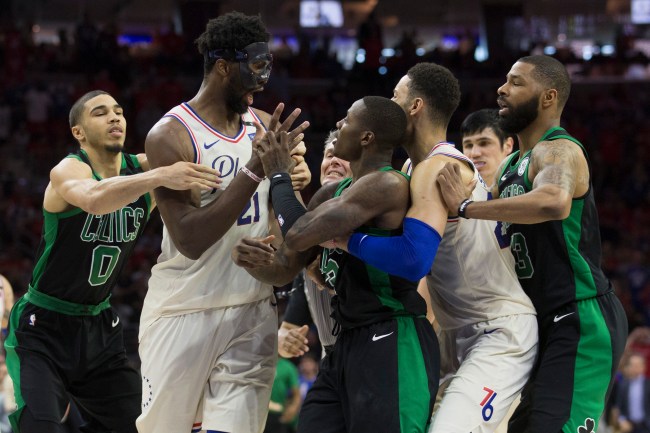 The Celtics/Sixers rivalry is HOT. The Sixers needed last night’s 118-115 home win over the Celtics to earn some trash-talking clout, as the temperamental Celtics seemed to have Philadelphia’s card for the past five years (currently 17-3 against Philly since 2014, and dominating them in last season’s playoffs). Before last night’s game, Celtics guard Terry Rozier poked the bees nest by telling a Philly troll on Twitter, “Philly ain’t beat us since they had AI dummy.”

Before the game, FS1 host Kristine Leahy asked Rozier what the first word that comes to mind is when she says ‘Joel Embiid.’ Terry’s response: ‘Lame.’

After the Sixers win, in which Embiid scored 37 points, 22 rebounds and a crucial block on Kyrie Irving with 35 seconds left, the Sixers center trolled Rozier on Instagram:

Note the location: Lametown, with Terry in the background.

After the loss, Terry did some smack talking of his own, saying that he thought “confetti was going to drop tonight.” Terry of course is alluding to the Sixers dropping confetti in their arena during the end of regulation of Game 3 of last season’s playoffs. The score was tied, and the Celtics would go on to win the game.

Terry Rozier: "I thought the confetti was going to drop tonight" 🙃🎊 (Presented by https://t.co/Av8GdCAzPA) pic.twitter.com/OvrQtG0855

Sixers fans saw this as a rare opportunity to pile it on.

Terry rozier after this one pic.twitter.com/HQg3JC6dDx

Literally what is Terry Rozier

There may be a murder on the court during the postseason if these two teams meet. I got my money on Marcus Smart as the perpetrator.