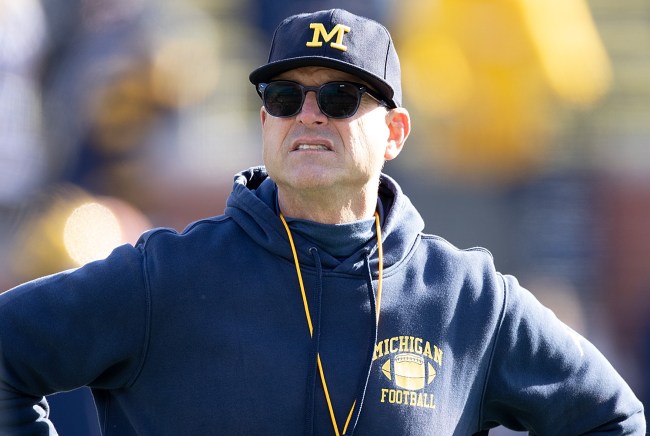 It’s been almost three years since rumors surfaced that Michigan was toying with the idea of giving Jim Harbaugh a lifetime contract, which was both a way to potentially give him some job security that would provide the head coach with some incentive to stay at the school if he was tempted to defect to the NFL while also announcing their confidence in his ability to return the program to the glory it’s been seeking since the Wolverines last won a national championship in 1997.

Harbaugh’s tenure got off to a pretty solid start, as the team went 10-3 during both of his first two seasons at the helm. The aforementioned report surfaced following a loss to a fifth-ranked Wisconsin team that dropped Michigan’s record to 8-3 a week before they faced off against Ohio State, a contest they would also lose—as Harbaugh has every single time he’s faced the Buckeyes—and the team wouldn’t win another game during a year that saw it finish at 8-5.

Michigan did bounce back the following season but had their College Football Playoff hopes dashed after experiencing yet another loss at the hands of their archrival. After another underwhelming campaign in 2019, the threads potentially began to unravel yet again last weekend when they fell to another long-time foe in the form of the unranked Michigan State team that toppled them in a game the Wolverines came into as the 13th-ranked squad in the country.

As a result, the future is a bit murky up in Ann Arbor, as Harbaugh’s contract is set to expire at the end of next season and he’s repeatedly deflected questions concerning the status of a potential extension. However, based  on what Fox Sports analyst Joel Klatt said when he chatted with Colin Cowherd on Wednesday, he says he thinks there’s a good chance Harbaugh could not only walk away from the program (though he failed to specify if that could happen before his contract ends) but football altogether, saying he could see the coach spending a few years “driving around the country in an RV.”

"I wouldn't be shocked if Jim Harbaugh stepped away… If it's not going to work at Michigan, he's not going to go anywhere else." — @JoelKlatt pic.twitter.com/EyKtY45CsK

Klatt stressed he wasn’t joking, and while the RV comment may have just been an example of the many options Harbaugh could turn to in order to keep himself busy, I now want nothing more than a reality show following him making his way across America and saying, “Oooh, we gotta stop there!” whenever he passes a billboard for an alligator farm or any roadside attraction featuring something described as “The World’s Largest.”

I can only hope someone with more control at a television network than myself can make those dreams a reality.