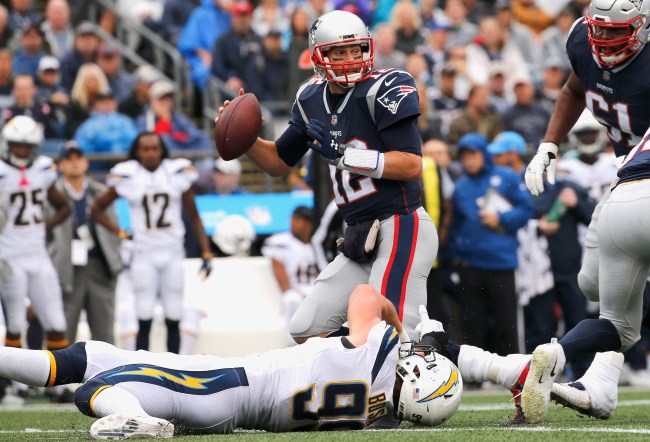 Tom Brady escaped his divisional round playoff contest against the Los Angeles Chargers on Sunday nearly untouched. Brady was sacked a grand total of zero times in the game and hit just twice in the 41-28 win. Not a good look for a defense that sacked Lamar Jackson seven times in the AFC Wild Card game.

Chargers Pro Bowl defensive end Joey Bosa, who had 5.5 sacks this season, was mic’d up during the divisional game against the Pats and couldn’t hold in his awe for TB12, who finished the game completing 34 of 44 passes for 343 yards and a touchdown.

After the game, Bosa reiterated his cap tip:

“He did a really good job getting rid of the ball,” Bosa admitted. “I mean, every single time I won — which, I won a few pass rushes here and there — the ball was gone. We made a joke, we were talking to each other and he just patted me on the back and I said, ‘Stop getting rid of the ball so fast!’ He said, ‘Stop getting to me so fast and I won’t have to get rid of it!’ Their O-line, they did a good job. I wasn’t getting much in the first half. Every time you win a rush and you look up and the ball is gone, it’s a little demoralizing. But I just kept going and I think our defense fought that whole second half. Came up very short this time.”

Bosa’s admiration for Brady is understandable seeing as he was just six years old when the Patriots quarterback won his first Super Bowl.