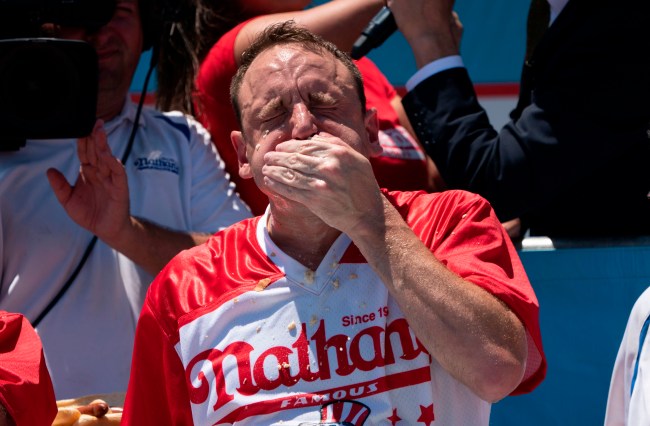 Joey Chestnut might be the greatest living athlete in America. Sure, he doesn’t have six Super Bowl rings like Tom Brady, the NBA titles of Jordan or LeBron, but none of those supposed G.O.A.T.s has ever won the Nathan’s Hot Dog Eating Contest TWELVE damn times like Joey Chestnut.

In what might be just another notch on his belt as the greatest competitive eater the world has ever known, Joey Chestnut just set a new world record by eating an almost unfathomable 32 McDonald’s Big Macs in one sitting. That totals around 15.36 pounds of meat (without the other items) and it only took him 38 minutes to set this new world record.

I want you to really think about that for a moment. He ate 15.36 pounds of meat in under 40 minutes. The average American eats somewhere between 3-5 pounds of food each day. He tripled the upper limit in just 40 minutes. And he ate around 1/15th of the average annual meat of Americans intake in just 38 minutes.

Competitive eater Joey Chestnut has dominated the Nathan’s hot-dog eating contest with 12 titles. Now, his talents have expanded to hamburgers.

Chestnut consumed 32 McDonald’s Big Mac sandwiches in one sitting to set a world record (yes, there’s a world record for that) on Feb. 12, before releasing a video on Thursday. The 32 double-patty hamburgers took him just over 38 minutes to devour.

Chestnut became a star at the annual Independence Day hot dog-eating contest, where he’s won 12 of the last 13 competitions, including a record of 74 hot dogs in 10 minutes in 2018.

Chestnut has branched away from hot dogs in the past, this summer eating a record 413 Hooters chicken wings in 12 hours for National Chicken Wings Day.