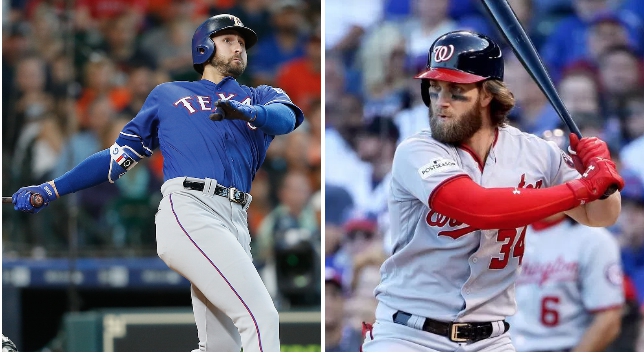 Imagine being the opposing pitcher on a Little League team facing Joey Gallo and Bryce Harper. That one game could end a young career. Well, back in the early 2000s, 8 and 9-year-old pitchers were tasked with throwing to the future Major Leaguers as they grew up together in Las Vegas and were on the same Little League team.

In an interview with ESPN Radio’s Jon Sciambi, the Texas Rangers first baseman recalled a story of the exact moment in which Bryce Harper ended Gallo’s tenure as Harper’s personal catcher–a position he held for three years.

“There was one game we were playing in Vegas, and he just struck out to end the inning and I could see he was pretty upset. So, I’m like, ‘Oh, ok. Here we go.’ You know? And I didn’t really know what I was doing behind there. I was just able, had the ability to catch a guy throwing hard.”

“I think first pitch is wild, next pitch comes in – he’s not even looking when he’s throwing. His head’s snapping the other way. [Throws the next pitch] right in the dirt, and I try to just scoop it – no idea what I’m actually doing trying to block. Hits me in the ribs. Take my helmet off, I’m crying, coming out of the game, coach comes up to me, takes me out to the stands and my mom gets me some ice cream. His mom’s sitting there feeling bad. And after that I obviously never caught again.”

Flash forward 15 years and it seems the two are both doing okay.