Joey Gallo Once Threw A No-Hitter In High School, Brushed Off Greg Maddux Afterward, Then Took His Daughter To Prom That Night 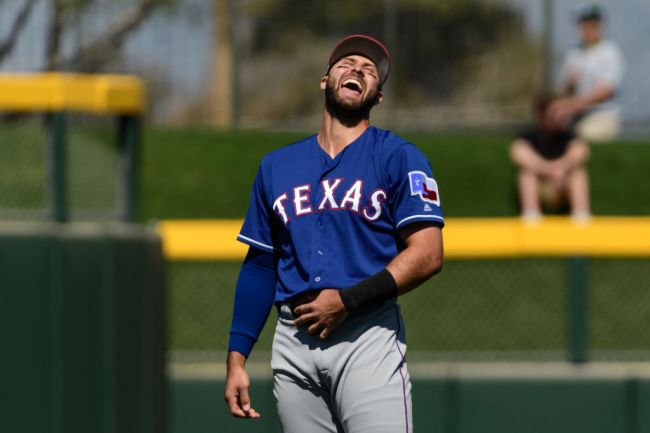 Today, Joey Gallo is known for hitting home runs, but back in his high school days, he was a force on the mound as well. While he did hit 67 dingers and batted .466 during his 160-game high school career, he threw a no-hitter at 17-years-old and after doing so, just so happened to run into the most famous pitcher to never throw a no-no, Greg Maddux.

Maddux apparently helped out at Gallo’s school, Bishop Gorman in Las Vegas, and had seen him play quite a bit. Gallo recently joined MLB Network to share the story of his no-hitter and how Maddux wanted to talk to him about pitching, but he wasn’t having it, he was more concerned with hitting. He also explained that the same night he threw a no-hitter, he took Maddux’s daughter to prom. As the saying goes, chicks dig the long ball.

The way Gallo explains it, he threw a no-hitter, then had to make small talk with Maddux while picking up his daughter to go to prom, but Gallo wasn’t all that interested in talking about pitching with one of the greatest pitchers in the history of the game. Talk about a confident 17-year-old kid.

“We actually had a game earlier that day, and I pitched and I threw a no-hitter that day, and then I ended up going to prom later that night with Paige Maddux,” Gallo shared on MLB Network. “So it was an interesting day. It was really fun. But, you know, showing up and having to talk to Greg for 20 minutes and taking his daughter to prom was pretty nerve-wracking for a 17 year old.

“It was kind of an icebreaker, but I think he was at the game for a little bit because he was always helping out around the school with our team, so he actually talked to me about it and was talking to me about pitching and I didn’t really want to pitch coming out of the draft, either, so I was more just talking about hitting… so it was pretty interesting.”