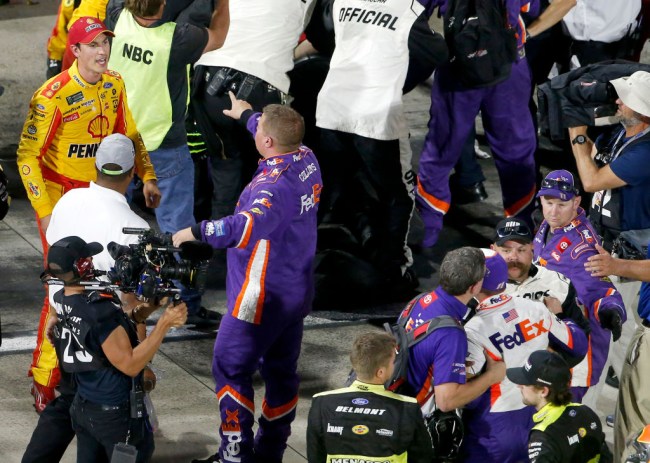 Martin Truex Jr. pulled off the checkered flag at Martinsville today, securing his spot in the Championship 4 at Homestead-Miami Speedway in three weeks. But the biggest post-race drama wasn’t in Victory Lane – It was on pit road, when Joey Logano confronted Denny Hamlin about the #11 car not giving way for Logano on a turn.

Joey Logano gave Denny a little shove, then the rest came to fisticuffs. It looks like someone from Joey Logano’s Team Penske crew actually gets ahold of Denny and drags him to the ground before NASCAR officials come over to break things up.

Nothing like a NASCAR fight from short track racing, baby.

And here’s Denny Hamlin talking about what caused the fight:

Take a listen to what @dennyhamlin had to say following his altercation with @joeylogano on pit road. #NASCARPlayoffs pic.twitter.com/hihRxrlawr

And here’s Joey Logano talking about what caused the fight with Denny Hamlin:

“I don’t really know what happened.” @joeylogano explains his side of the story following the altercation with @dennyhamlin. #NASCARPlayoffs pic.twitter.com/A8hSjKNvqP

What an eventful day at the track.