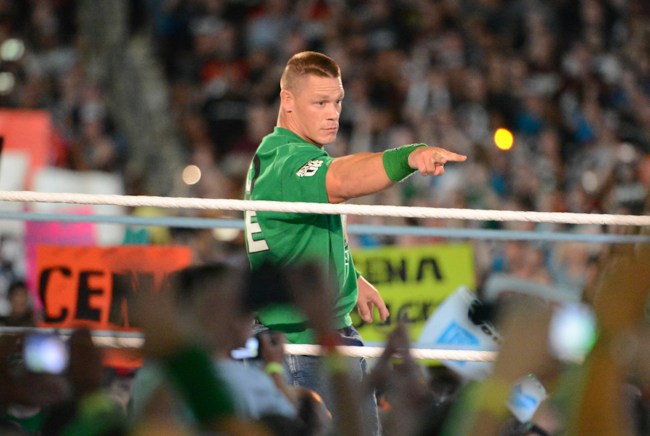 For the last two decades or more, John Cena has been pretty bulletproof in the eyes of WWE brass. At one point, Cena was a money printing machine and his merchandise made himself and the company a boatload of money.

Winning over the crowd during his early years with the company was one of the main reasons for Cena’s popularity and one of the easiest ways to win the fans over is to be entertaining.

Former WWE producer and current AEW coach, Arn Anderson, recalled a time early in Cena’s career when he tried to take the entertainment part of wrestling a little too far and got his brains beat in for his efforts.

On a recent episode of The ARN Show, Anderson recalled a house show match where Kurt Angle got a little worked up over Cena jumping into the crowd in the middle of a match.

“He was wrestling Kurt Angle. As we know, Kurt Angle is the real deal. He’s an assassin,” remembers Anderson. “All of a sudden, I see John, out of nowhere during a random time in the match he rolls out of the ring, goes over the rail about 15 rows deep, grabs one of those big foam hands and folds it into a bird, and points it at Kurt Angle.”

Anderson recalled Angle be none too pleased about the incident and the Olympic Gold medalist let Cena know he was pissed when the young star climbed back over the railing.

“The audience popped, but as he gave it back and came over that rail to rejoin the match, guess who was waiting on him and not too happy about what just happened?

That would be Kurt Angle and he proceeded to beat John half to death.

He got a little stiff and snug with him because it was something that did not work in the match, it was unprofessional, it was just a foolish thing to do during that point in the match.

It’s just one of those things that goes through the learning process, if you learn from those mistakes you can accelerate and move forward.”

Angle and Cena would get past this incident and go on to have legendary matches against one another, including the main event of Survivor Series in 2005.

[via The Arn Show]