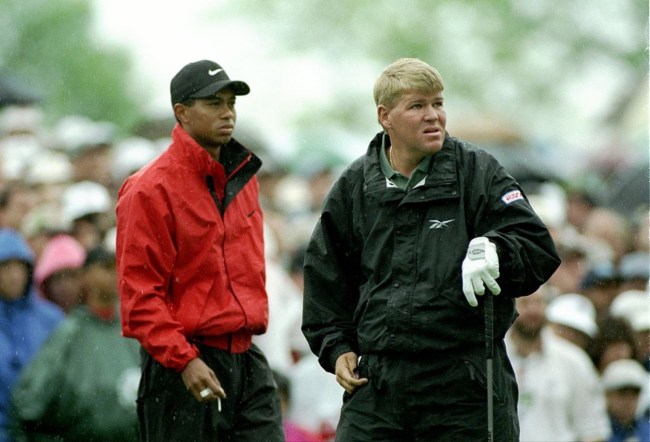 John Daly and his son, John Daly II, were able to hold off Tiger Woods and son Charlie to take home the 2021 PNC Championship. With their win over the Woods’, Daly has gloriously been making headlines.

After Team Day’s win, the two-time major winner joined the ‘Full Send Podcast‘ with Bob Menery and Tiger was of course a topic of discussion.

Daly made it clear that it’s all love between himself and Woods, but Menery did bring up the 2019 memory of Tiger making a somewhat snide comment at that year’s PGA Championship.

Daly was allowed to ride in a cart that week at Bethpage Black and when Woods was asked about it, he responded with “As far as JD taking a cart, well, I walked with a broken leg, so.”

Woods was of course referring to his 2008 U.S. Open win in which he took down Rocco Mediate in an 18-hole playoff on essentially one leg.

Daly And Woods Have No Beef

Daly didn’t necessarily take Woods’ comments as a personal shot, instead, he blamed the media for that one comment blowing up back in 2019.

“He didn’t know the facts because the media, ‘the media’ (sarcastic gesture) didn’t tell him I had diabetes and I had a bad two knees and my hips out and all this stuff. He apologized to me at dinner the other night. I mean, he’s fine. I love Tiger,” Daly explained.

Daly also went on to explain during the podcast that he was one of the first people to reach out to Tiger following his car accident in February. Woods personally thanked Daly for the positive texts after the accident during a dinner at the PNC Championship as well, according to Daly himself.