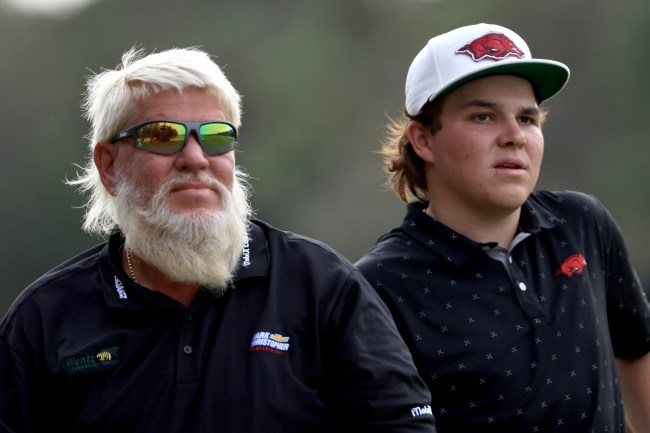 All of the conversation leading up to the PNC Championship was about Tiger and Charlie Woods, and understandably so. However, it was John Daly and Little John Daly that stole the show and came out victorious.

The PNC Championship is a Pro-Am event that is held annually in Orlando, Florida. It typically features a group of big-name golfers and a lot of them play with their son.

After starting the day quite a few strokes back, Team Woods made a legitimate push for the title. Charlie, at 12 years old, has unbelievable swagger and shares a lot of the same mannerisms as his father. It’s awesome.

But the Woods duo could not overcome an unreal weekend from Team Daly.

John and John II were absolutely dialed all weekend and it paid off.

The tournament began with a practice round and a group dinner on Friday. Competitors were told to “dress up” for the dinner and Daly interpreted the invitation differently than the rest. He showed up in a Santa Claus outfit.

When play began on Saturday, JDII and his father stepped up to the first tee rocking Arkansas from head to toe. Daly Sr. went to the University of Arkansas in the mid/late 80s and his son is a freshman there now.

He was on fire right away.

Later in the round, Daly II missed a putt and immediately looked at his putter, which is a veteran move.

Kid was born to be on Tour pic.twitter.com/othYbQxU4b

No better way to close it out! 🦅

And then they came out blazing on Sunday.

Jr. sunk a deep putt to start the day.

John Daly II from downtown!@PGA_JohnDaly and his son are now just one back. pic.twitter.com/2Jq1wZ67tX

Not long thereafter, Daly Sr. dropped a dime to move into a tie for the first position.

That tie quickly became a solo lead with an eagle on the third hole.

John Daly II with an absolute gem from 224 yards!

The momentum continued and JDII followed up with another gem of an approach.

Later in the round, Little John sunk another great putt to maintain the lead.

A birdie capped a front-nine 28.

The momentum kept rolling on the back nine.

Team Daly is on fire.

9 birdies and an eagle through 12 holes to lead. pic.twitter.com/tOGAkg2piv

Team Daly held onto the solo lead and as they took the tee on 18, they needed to manage a horrific choke to lose.

Big John Daly was not worried. As the two stood on the fairway of the 18th hold (of a family tournament), he pulled out a cigarette and sparked a heater.

Such a legend. Daly won't change for anyone or anything and I love it. Authentic as could be for good or bad. #PNCChampionship John and John Daly II for the dub. pic.twitter.com/Door7XWTkY

He did not have a care in the world.

John Daly casually ripping a dart in the middle of the fairway #PNCChampionship pic.twitter.com/38RfrGknbe

Team Daly finished the day at 15-under and won the tournament by two stroked over Team Woods at 27-under. They spoke with the media after the win.

.@PGA_JohnDaly and his son John Daly II speak with the media after winning the @PNCChampionship. https://t.co/QwDcYlOBoi