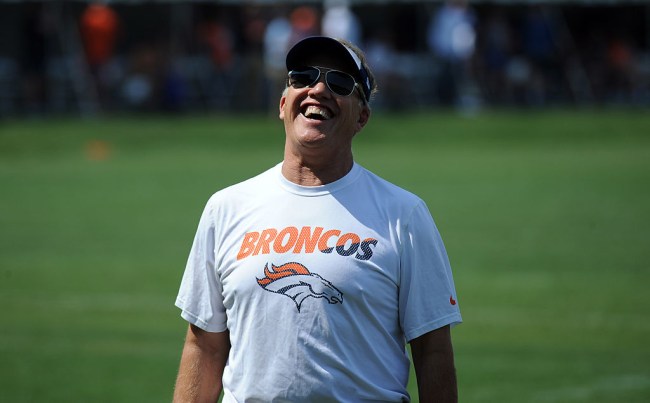 You might have noticed a lot of content being published from our interview with Woody Paige, reason being is the man was absolutely electric on episode No. 71 of The Brilliantly Dumb Show. Paige is a man who has seen the behind the scenes of sports for years and covered the Denver Broncos for a whopping 35 years. And good would those 35 years be if you didn’t have a few great John Elway stories?

Knowing that there is nothing off limits with Paige, I went right for the kill during our interview: “Woody, who was the best person to get drunk with in the sports world? Did you and John Elway ever hit it off at a bar and get wasted?”

Without hesitation, Paige took viewers back to a time in Colorado when Elway grabbed Paige and 2 offensive linemen after practice to head to a quiet military bar that was serving up 10 beers for a single dollar special.

“The big draw that night was 10 beers for a dollar, we ended up drinking 40 beers. That was before people cared, we were in three or four cars after, driving down the streets of Greeley, Colorado and they could of put all four of us in jail,” Paige explained.

Paige went on to say that Elway would hop into his Corvette after the bar and drive off into the Colorado sunset.

Imagine walking into a 10 for $1 beer type of bar with the boys and Elway is right there just cranking down beers? What an incredible spectacle that must have been for Broncos fans inside the place. Your star quarterback just being a regular guy doing regular guy stuff. Just another incredible bit from the interview with the legend that is Woody Paige.

To catch the full interview, go ahead and subscribe to The Brilliantly Dumb Show on YouTube, Apple Podcasts and Spotify as well.