John Elway Calls Joe Flacco A ‘Perfect Fit’ For The Broncos, Just Like He Did For 4 Other Failed QBs 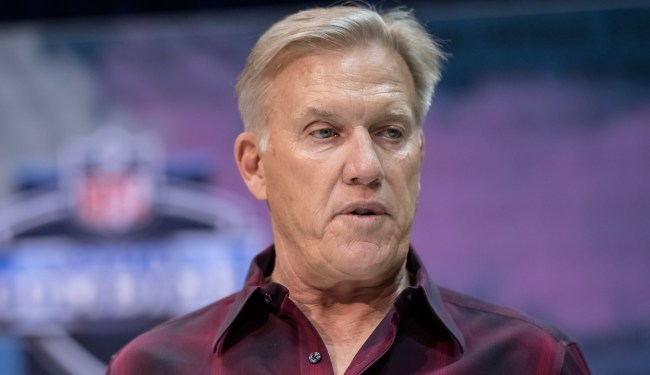 Okay, show of hands… who out there thinks Joe Flacco, Elite Quarterback, is the final piece of the puzzle in Denver? The man who will return the Broncos to their former glory? Take them to the promised land of Super Bowl LIV?

Put your hand back down, John Elway. Your vote doesn’t count around here.

That’s because Elway just called Joe Flacco a “perfect fit” for his Denver Broncos, aka the kiss of death.

Elway on why Joe Flacco and not Case Keenum: “We looked at what we want to do offensively, get the ball downfield and Joe’s availability, the success he’s had as a starter and in the playoffs, we thought he would be a perfect fit for us.” #9sports pic.twitter.com/MHCgWeg9Uo

Why is it the kiss of death? Because, thanks to Andy Nesbitt of For The Win bringing this to my attention, this is the 11th time by my count in recent memory that John Elway has called someone a “perfect fit” for the Broncos, and eight of the previous 10 (including four quarterbacks) have not exactly panned out.

The only reason it’s not 10 out of 10 (yet), is because the Broncos’ new head coach Vic Fangio and new right tackle Ja’Wuan James were also called a “perfect fit” by Elway.

“Look at the numbers. He’s first in everything. … He’s the perfect fit for what we need on our football team right now.” – Pres. of Football Ops/GM John Elway on Coach Fangio pic.twitter.com/wTwTGLMrEb

“We really think that he can solidify that right tackle, and that’s our expectation”

Fangio and Elway emphasized how they believe Bolles and James could be OTs for a long time.

You know who else Elway thought was a “perfect fit” for the Denver Broncos?

Elway: "He was the perfect fit for us so we're extremely excited to welcome Case to Denver and have high expectations of what we can do, especially on the offensive side."

Elway: "The leadership qualities that Vance has are tremendous… I believe he is a perfect fit for us."

John Elway thinks that Gary Kubiak, he of the career 61-64 record, is the 'perfect fit' for the Broncos. Hilarious. #football

Elway said the fact Osweiler is in last year of contract had no bearing on how the team feels — "He's perfect for this offense.''

Okay, not exactly “perfect fit,” but Osweiler knew what Elway meant and had his back.

Osweiler: "This is a perfect fit. I cannot wait to get up there & learn from the great coaching staff & learn from John [Elway] & Peyton.”

WOW – "I think there’s a connection already with Tim Tebow … He fits perfect into this community,” Hall of Famer John Elway

Maybe Elway is right when you really think about it. Maybe Flacco really is a “perfect fit” in Denver.

I mean, he's underwhelming and mediocre so it really is a perfect fit https://t.co/6jTFzxhL3V