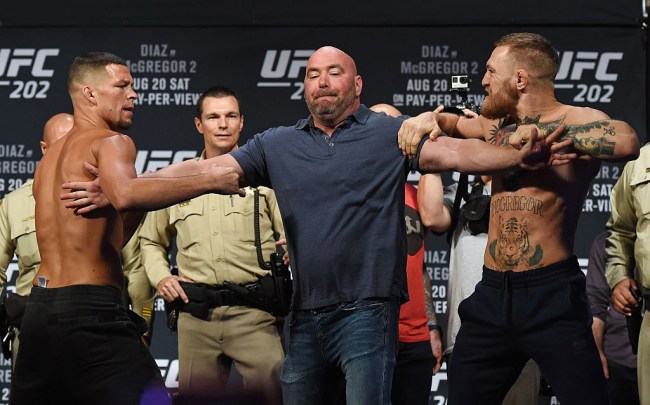 Despite all of the recent reports detailing Conor McGregor’s desire for a rematch with Khabib Nurmagamedov, one of his coaches and closest confidants, John Kavanagh, expressed his desire for his most famous client to take on another one of his foes from the past.

Kavanagh, McGregor’s longtime coach, spoke to MMA insider Ariel Helawni about a variety of topics, including who he’d like to see the former lightweight and featherweight UFC champion fight next.

Appearing on ESPN’s Ariel Helawni’s MMA Show on ESPN on Monday, Kavanagh indicated that he would like to see his infamous student complete the Nate Diaz trilogy in his next UFC fight.

“I’ve always loved the Diaz trilogy, you know, I’ve kind of said that from the start. I’m really looking forward to seeing how Nate looks in the fight that’s coming up,” Kavanagh begins.

Diaz, who will be facing off against Anthony Pettis UFC 241, will be making his return to the Octagon for the first time since losing to Conor McGregor at UFC 202 back in August 2016.

“That would just be as a fan, very exciting. Justin Gaethje has a similar style of taking a tremendous amount of punishment and keep coming forward. Honestly, if it’s Conor excited and motivated and pushing himself hard, it doesn’t really matter all that much to me. Anybody in the UFC at the level Conor would be fighting are good opponents with different challenges,” Kavanagh politically continued.

However, when pressed on the issue by Helawni — “You don’t have a strong preference?” he asks — Kavanagh admitted he’d like to see McGregor take on Diaz one last time.

“If you’re gonna put a gun to my head, it’d be the Diaz trilogy. That’d be it for me,” he concluded.

During his appearance, Kavanagh also revealed that — despite McGregor’s recent hand injury — he expects to see the former “double champ” in the ring this year.

As far as Kavanagh is concerned, the only question that remains at this point is who that fight will be against.