NFL World Mourns The Loss Of Legendary Coach And Broadcaster John Madden, Who Passed Away At The Age Of 85 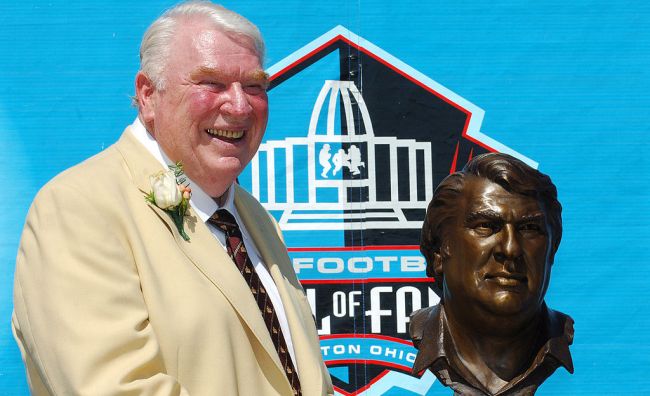 Legendary National Football League head coach and broadcaster John Madden has passed away at the age of 85-years-old.

Following the news of his passing, the NFL released the following official statement:

“Earlier today we received the sad news that the great John Madden died unexpectedly this morning. He was 85,” says an official statement from the NFL.

“On behalf of the entire NFL family, we extend our condolences to Virginia, Mike, Joe and their families,” said NFL Commissioner Roger Goodell. “We all know him as the Hall of Fame coach of the Oakland Raiders and broadcaster who worked for every major network, but more than anything, he was a devoted husband, father and grandfather.”

Madden, who served as the Oakland Raiders head coach from 1969 to 1978, won Super Bowl XI with the team in 1976. Madden was inducted into the Pro Football Hall of Fame back in 2006. After he retired from coaching, Madden embarked on a broadcasting career that established him as one of the most iconic voices in the history of the sport.

During his career as a color commentator, Madden called games for all of the major broadcasting networks: CBS, Fox Sports, ABC, and NBC. Beginning in 1988, Madden lent his voice, personality, and name to the iconic Madden video game franchise, which has since become *the* definitive football video game.

Following the announcement of his passing, NFL fans across all generations took to social media to mourn his loss and to celebrate his impact on the game of football:

John Madden has died at the age of 85. Known to one generation as a Hall of Fame coach, another as the greatest broadcaster ever, and yet another for the video game that bore his name. A football legend. An American original.

Madden was an inspiration. As a coach, an author, a broadcaster and of course the face of a legendary video game.

John Madden passed away this morning, per the NFL.

An absolute legend. Hard to imagine anyone having a bigger, more wide-ranging impact on football. He was 85.

John Madden was one of the most remarkable people in the history of football. A head coach at 32, a Super Bowl champion by 40, then building one of the best broadcasting careers ever two years after that. A legendary career and life.

No man’s name has ever become as synonymous with a sport as John Madden and football.

RIP to the legend. pic.twitter.com/VQC3T4l3Sr

John Madden and football. Football and John Madden. Voice of my Sundays growing up. Legend.

we lost a football legend today…

big part of why everyone my age thinks every football color commentator is wack is because we grew up with john madden. man set an unreachable standard.

John Madden is the NFL. You cannot tell the story of its rise without tracing it through him. A true face of the league and an ambassador for football and a universally beloved figure. RIP

Our thoughts are with his friends, family, and loved ones during this difficult time. Rest in peace.