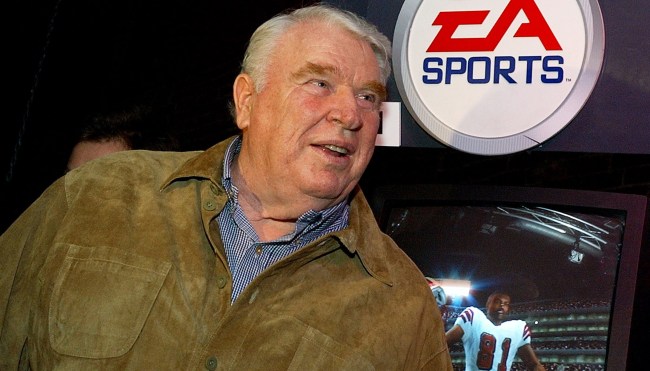 John Madden won Super Bowl XI as head coach of the Oakland Raiders. His career winning percentage as a head coach in the NFL was 76.3 percent (second only to Guy Chamberlain – look him up, and ahead of one Vince Lombardi, for whom the Super Bowl trophy is named). He has been enshrined into the Pro Football Hall of Fame. And he has had the highest selling NFL video game named after him since 1988.

He also, at age 84, says that if he were coaching an NFL team today, he would make his assistant coaches play that video game, Madden, and hire the best Madden players to be part of his staff.

“I would have a couple of young guys that are good, good Madden players, and hire them and put them on my staff,” Madden told ESPN. “And each week I would have them play our opponent. If the Raiders are playing Kansas City, I’d have one of them be the Raiders and one of them be Kansas City. And then I would run our players against their defenses and their defenses against our players. And I’d have them just check that out and then write up — this was good, this was bad, had trouble here and trouble there. I don’t know how much I would use it, but that’s what I would do.”

Frankly, I am surprised this hasn’t already happened. The Madden video game has been around for 33 years now and there is little doubt that there are players out there who have been playing the game consistently for over a decade or two, or even all 33 years.

As Madden points out in the interview with ESPN, “By playing the game, you learn to watch the whole play. When you play the video game, you see the whole play and what everyone does.”

He’s not wrong there.

Madden also recalled a time where the video game started changing the way NFL broadcasts were created and produced.

“David Hill is the president of Fox at that time and he’s giving a talk to all the announcers, producers and directors. And he says what we want to do is we want to make our game look like the video game,” said Madden.

It’s not just coaching where Madden thinks the game players could thrive in the NFL either.

“I also know in talking to my grandson and his friends that they really enjoy the general manager component,” said Madden. “Some of these guys like to build their own teams and they’re more interested in being professional general managers than being the pro players. I think that we’re also developing that guy, and I think the more that we can go in that direction, the better off we’re going to be.”