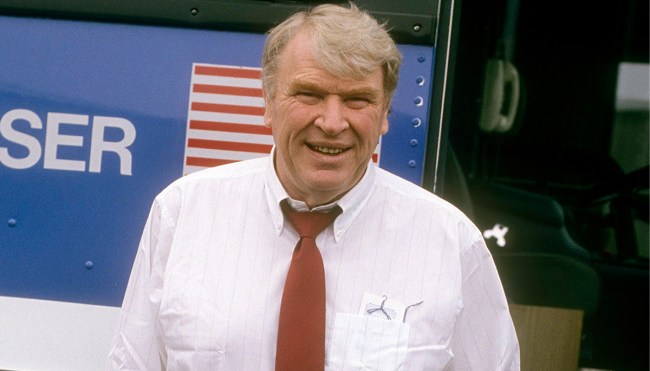 Many around the sports world have been mourning the life of Hall of Fame coach and commentator John Madden since his passing earlier this week. He was one of the biggest personalities in NFL history with an unmistakable voice in the broadcast booth.

In his time calling games for both CBS and Fox throughout the 1990s, Madden often traveled to locations via his oversized bus which he dubbed “The Madden Cruiser.” The announcer was well-known to be afraid of flying so he took to the highway as his main source of transportation.

As for restrictions on the bus, there was one ‘Golden Rule’ that only three people broke according to a Matt Millen interview with The Athletic: “There’s No Pooping on the Madden Cruiser.”

Millen worked alongside Madden at Fox, so they’d often travel together to games. He admits to being one of the three rule breakers, an incident that Madden never let him forget. Of course, that could’ve been due to the fact that they were just a block away from the hotel at the time of the violation.

The other offenders were Fox producer Richie Zyontz, and NHL great Wayne Gretzky. Millen says that Gretzky got a pass, for some reason, but that he and Zyontz were never allowed to live their deuces down.

“Madden was known for having three rules for his football players. No. 1: “Be on time.” No. 2: “Pay attention.” And No. 3: “Play like hell when I tell you to.” He had a lesser-known rule for his bus passengers. “Nobody takes a dump,” Millen says.

Only three people broke the rule in all of Madden’s years of busing. According to Millen, they were Fox producer Richie Zyontz, hockey great Wayne Gretzky and Millen himself.

“He would always bring that up,” Millen says. “Somehow, Wayne Gretzky got a pass. Richie and I bore the brunt, but in particular, it was me because I broke the rule a block away from the hotel. He always said he had to carry that turd around the rest of the country.”

Gretzky is one of the best to ever play the game of hockey. He’s the NHL’s all-time leader in goals, assists, points, and games played, but defying the Cruiser’s golden rule and having Madden be okay with it may be his crowning achievement.