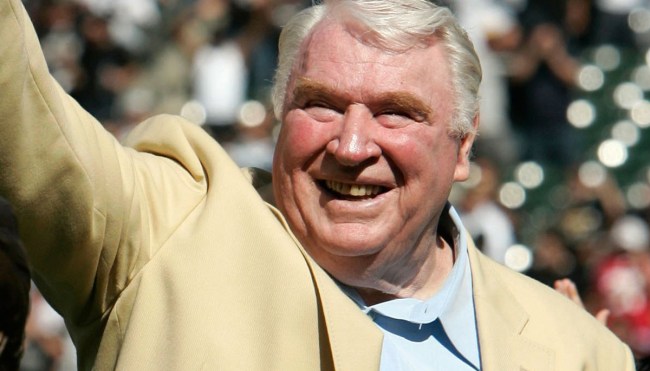 Everyone familiar with professional football knows the name John Madden, whether that be from his days as a player, his time in the broadcast booth, or his widely popular video game franchise. However, the NFL legend never lost his love of the sport.

The Hall of Famer who left us at the age of 85 stepped away from the sport he was most connected to and out of the spotlight of the nation’s most popular pastime. Little was been said about Madden since his retirement from broadcasting, so many fans likely wondered what he did after stepping away from the game he loved.

So, let’s answer that question while diving into his past, looking at how he achieved his football fame, and exploring what he did before passing away. 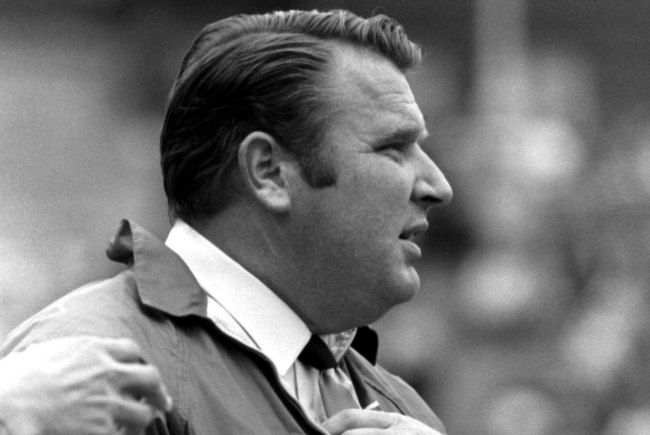 Madden played football from a young age, and following his time on the team at Jefferson High School in Daly City, California, he eventually earned a spot on the College of San Mateo roster. After a short stint with the Bulldogs, he landed a scholarship offer from the University of Oregon. Unfortunately, a knee injury forced him to redshirt and he never played a down for the Ducks (that was the first of multiple serious injuries that would play a large role in bringing his playing career to a premature end).

Madden bounced around a bit after his time with Oregon before landing at California Polytechnic State University, where he played both offensive and defensive line—which, to those that remember the broadcaster’s stature, should come as no surprise.

While he wasn’t exactly a superstar in college, he did garner enough attention to get selected by the Philadelphia Eagles in the 21st round of the 1958 NFL Draft. Unfortunately, his professional playing career ended before it started when he suffered another knee injury at training camp ahead of his rookie season

It may have seemed debilitating at the time, but it’s a moment that would lead him into the next part of his career. 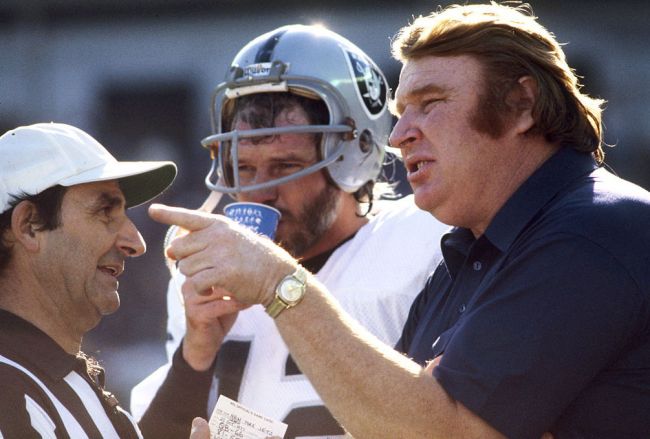 Following that career-ending injury, Madden began studying film, which piqued his interest in teaching. As a result, he headed to Cal Poly San Luis Obispo to earn a degree in education, and after graduating with his Master’s in 1961, he landed a gig as head coach at little-known Allan Hancock College in Santa Maria, California.

Madden used that job as a stepping stone to more prestigious roles, soon becoming a defensive assistant at San Diego State University. His success with the Aztecs began to get him noticed, and it soon led to the biggest break of his young career.

Madden’s final season with San Diego State was in 1966. He’d helped turn the program into one of the top mid-majors in the nation and folks higher up the food chain couldn’t help but take notice. At the end of that season, Oakland Raiders owner Al Davis hired Madden as the team’s linebackers coach, and while the team reached the Super Bowl during his first year there, the franchise found itself without a head coach after John Rauch bolted for Buffalo.

At 32 years old, Madden was hired to take over in the newly open vacancy becoming the youngest head coach in the NFL at the time. He’d lead the organization to a 12-1-1 record in his inaugural campaign, which kicked off an impressive ten-year run that came to an end when he called it quits in 1978.

With Madden at the helm, the Raiders went on what is arguably the most successful run in the history of the franchise. Oakland posted a 103-32-7 overall record (a winning percentage of 76%), which remains the highest ever among coaches with at least 100 wins. The team reached the playoffs in all but two of those seasons, playing in seven AFC Championship games and one Super Bowl.

It’s worth noting it wasn’t all butterflies and rainbows for the Raiders under Madden’s leadership, as the team routinely found itself at the center of some heartbreaking losses. Five of those AFC Championships appearances came during his first six seasons as coach, but they lost each and every one of them in a fairly dramatic fashion (three of those defeats came at the hands of the Pittsburgh Steelers, one of which featured Franco Harris’s “Immaculate Reception”).

The fans have spoken. And the #NFL100 Greatest Moment in NFL History is…

After failing to earn a spot in The Big Game during those campaigns, Madden and the Raiders finally landed their first Super Bowl appearance in 1976, where Oakland capped off a season where they only lost a single game with a decisive victory over the Minnesota Vikings in Super Bowl XI. It was the first time the franchise ever won a championship and was also the first (and only) time Madden would raise the Lombardi Trophy.

Madden led the Raiders back to the AFC Championship game the next season, but after missing the playoffs in 1978, he resigned as their head coach. Oakland never posted a losing record with Madden on the sidelines, and his impressive decade-long tenure would undoubtedly played role in him being inducted into the Pro Football Hall of Fame in 2006. 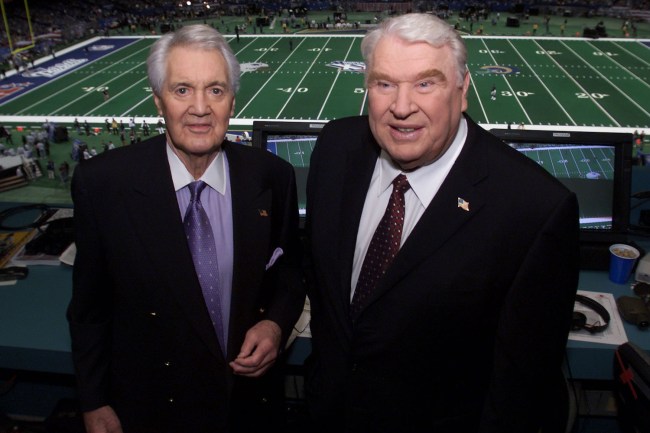 After hanging up the clipboard in Oakland, Madden jumped into sportscasting. Over the course of the next 30 years, he cemented himself as one of the most legendary commentators in NFL history during stints with ABC, CBS, Fox, and NBC. His buoyant personality, jovial voice, and vast knowledge of the game made him one of the more entertaining characters on the air at the time, and he soon turned that into a very lucrative career.

Madden’s broadcasting career kicked off when he joined CBS as an analyst. He’d eventually team up with partner Pat Summerall, who would be by his side during five Super Bowls between 1981 and 1994 (he also worked with Verne Lundquist and Vin Scully while employed by the network).

When CBS lost NFL television rights, Madden moved on to Fox in 1994 after landing a contract that was rumored to pay him an annual salary that was bigger than any NFL player at the time. He stayed at Fox for eight years before calling his last game for the network at Super Bowl XXXVI between the Rams and Patriots, which was his third championship game there and the last that featured Summerall at his side.

Madden continued to make his way around the quartet of national networks after landing at ABC the following season. His new gig allowed him to call Monday Night Football broadcasts alongside longtime sportscaster Al Michaels, and during the first of his many NFL telecasts there, he predicted a young quarterback by the name of Tom Brady had a fairly promising career ahead of him.

"I feel that he's going to be for real."

Madden earned a massive salary of $5 million per year during his three seasons with ABC before becoming the first NFL commentator to work for each of the four major networks when he joined NBC’s Sunday Night Football broadcast in 2006. His storied career in the booth officially came to an end at Super Bowl XLIII in 2009, as he announced his retirement that April and walked away from the broadcasting game with 11 championship games under his belt. 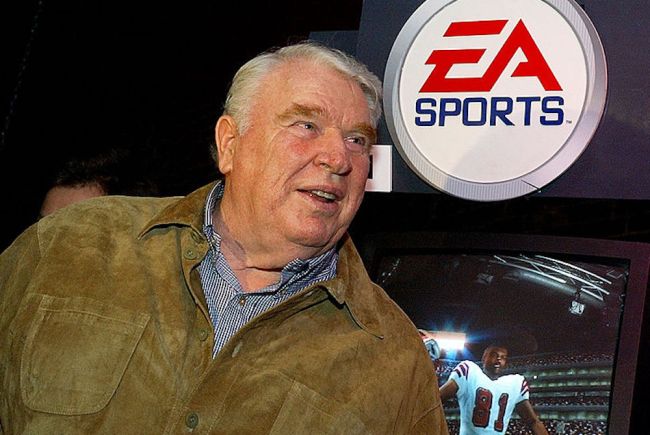 Madden made one hell of a mark on football during his time as a coach and a color commentator, but for people of a certain age, there’s one thing he’s associated with more than anything else: the Madden video game franchise.

The world was initially introduced to the Madden video games when Electronic Arts decided to take on Tecmo Bowl with the release of John Madden Football (commonly referred to as Madden ’88). The title—which featured a noticeable lack of NFL branding—was only available on PC before an updated version was rolled out for Sega Genesis and the NES in 1990.

In 1993, the series took a huge leap forward when EA finally secured a licensing deal with the league prior to the release of Madden NFL ’94. That marked the start of Madden‘s transformation into the football video game, as EA Sports has released a new and (at least allegedly) improved version on an annual basis for more than 25 years.

Over that span, Madden has generated billions of dollars in sales and is one of the most popular video game franchises ever created. The man who lends his name to the series (and earned a boatload of money as a result) also played a pivotal role in its development early on, and it’s safe to say his insistence that the gameplay was as realistic as possible paid off.

Of course, you can’t talk about Madden without talking about the dreaded “Madden Curse” that’s rumored to haunt any player that’s appeared on the front cover of the game, whether it involves them succumbing to injury or following up a career season with a decidedly subpar performance (Peyton Hillis, Shaun Alexander, Vince Young, and Antonio Brown are some of its most notable victims).

Those guys might not be huge fans of Madden as a result, but when you consider EA Sports has sold upwards of 150 million copies of the yearly titles since the first iteration was released, they’re decidedly in the minority.

When And Why Did John Madden Retire? 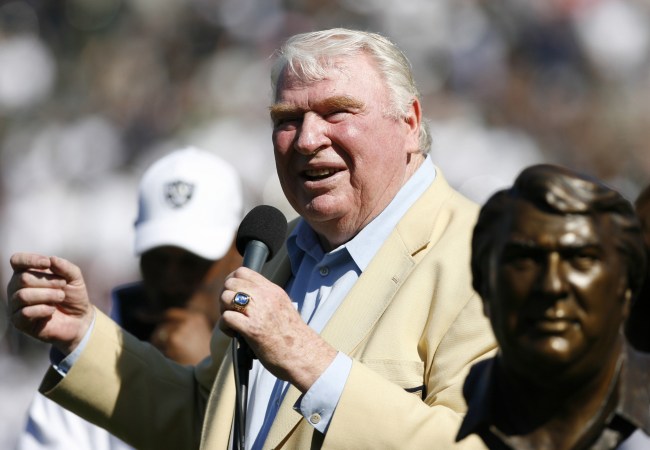 Part of the reason John Madden retired from coaching in 1979 was due to deteriorating ulcer conditions. However, he still managed to accomplish about all that he could during his 30-year broadcasting career, and he explained his reasoning for leaving the football world behind for good after he announced his second retirement in 2009, saying:

“I’m 73 years old. My 50th wedding anniversary is this fall. I have two great sons and their families and my five grandchildren are at an age now when they know when I’m home and, more importantly, when I’m not.

It’s been such a great ride… It’s still fun and that’s what makes it hard and that’s why it took me a few months to make a decision. I still love every part of it —the travel, the practices, the game film, the games, seeing old friends and meeting new people—but I know this is the right time.”

It’s pretty hard to blame him. 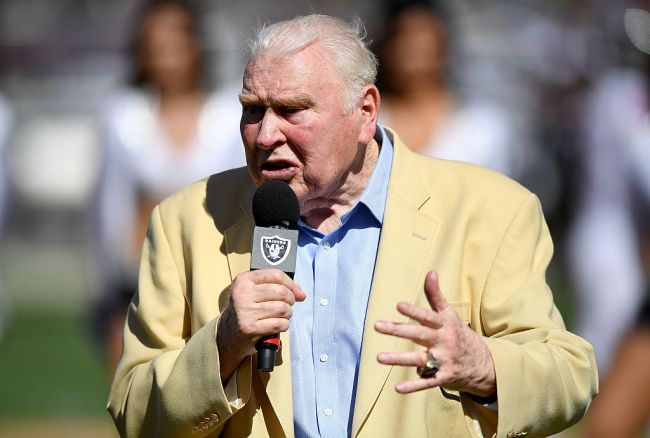 Madden passed away on December 28, 2021 at the age of 85. The NFL released the following statement in the wake of Madden’s death:

“Earlier today we received the sad news that the great John Madden died unexpectedly this morning. He was 85,” says an official statement from the NFL.

“On behalf of the entire NFL family, we extend our condolences to Virginia, Mike, Joe and their families,” said NFL Commissioner Roger Goodell. “We all know him as the Hall of Fame coach of the Oakland Raiders and broadcaster who worked for every major network, but more than anything, he was a devoted husband, father and grandfather.”

That passion for football has never fully left Madden, who still made occasional appearances on local radio shows to discuss the NFL (we even got the chance to chat with him a few years ago) in the years prior to his passing. He lived in Pleasanton, California with his wife, Virginia, to whom he’s been married for more than 60 years.

The NFL legend’s legacy will continue to live on through the Madden video game franchise as well as the coaches and broadcasters who will always be at least partially influenced by the work he did.