How John Madden’s 1981 Miller Lite Commercial Marked A Turning Point In His Career (Plus, What Does He Think Of Roger Goodell?) 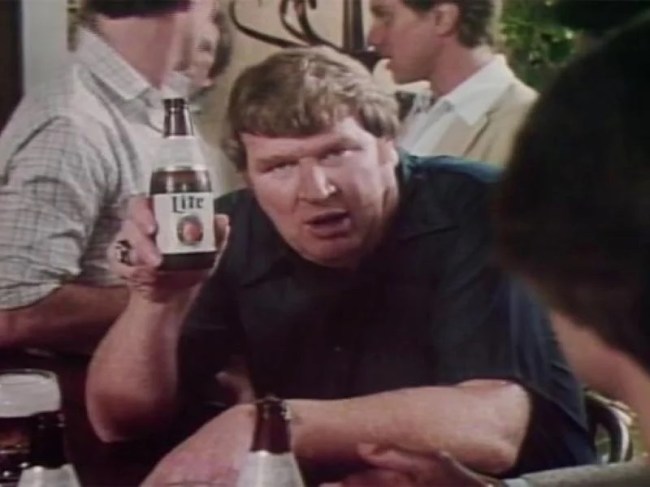 In life, everyone has a break. For John Madden’s great career second act, it came 35 years ago, in 1981. An advertising executive for Miller Lite had the guts to tell one of the NFL’s most successful coaches that “more people will know you after you do this than have ever known you” before starring in the beer’s new TV spot.

“I said, no, no. I said, you don’t understand,” Madden tells me on a phone call from his home in California. “I said ‘I was the head coach for the Oakland Raiders for 10 years… I played and coached in regular season games, playoff games, championship games, Super Bowl games, Pro Bowl games — the biggest games in the world. How can more people know me?'”

Madden’s familiar voice pauses before a moment of revelation.

“And they did! I went from John Madden, the coach, to John Madden, the Miller Lite guy who breaks through the wall. It was so big that I didn’t believe them. And then after I got in the commercial, you just become part of the team. It was an amazing experience.”

The commercial, which Miller Lite just re-aired to advertising the beer brand’s Steinie throwback bottles, aired during last week’s Thursday Night Football game. For Madden, the moment was a turning point for his career.

“It was a bridge to this life from coaching. And then the commercials got me into television as an analyst. And then of course I did that the rest of my career until I retired,” he explains.

“So the Miller Lite commercial was a game changer for you personally?” I ask.

“It was big,” Madden reflects. “A game changer for me, it was a game changer for drinkers. I mean, light beer– this was 40 years ago. People didn’t know about light beer. That was the whole thing. It’s less filling, tastes great.”

Now 80-years-old, I ask Madden if he’s excited about the commercial being exposed to a younger generation of football fans — a generation that might only know his name as the voice and namesake of a EA’s massive video game franchise.

“What’s exciting is to be able to see it again and have my grandkids see it,” he says. “That’s something that, as you say, generations that didn’t know that you even did that are going to see it. I think it’ll come in, and kind of come out of nowhere. I was surprised when I got contacted about Miller bringing it back. That was a fun time. That was a fun project. I always enjoyed it. To bring it back was a no-brainer for me.”

Last year Madden underwent heart surgery. Six months later, he was sidelined again for hip-replacement surgery. He’s “doing fine” and “active” now, with football still a major part of his retirement: He’s chairman of the NFL’s coach’s sub-committee, along with the competition committee in the NFL. He’s also on the NFL’s player safety panel.

In a lengthy, spirited discussion over the phone, Madden and I covered all sorts of topics — speculation over why the NFL’s ratings are in decline, commissioner Roger Goodell’s job performance, and his current involvement in the Madden video game franchise.

Here is Madden in his own words, Maddenisms and all:

How have you been doing since your surgeries?

I’m doing fine. I’m active now… I’m watching game film every day and injury film. And having conference calls and all that stuff. So, I’m really pretty doggone busy. The way the game’s going today, there’s a lot to be busy about.

A lot is being made right now, especially this week, about the NFL’s ratings drop. And after years and years, year after year of growth, a little bit of a slip. What your thoughts are on the ratings dip for the most popular sport in America?

One game in its entirety is three hours. So on Sunday and you watch two games, that’s six hours. Watch three games — the Sunday night game — that’s nine hours.

I mean, if you look at crowds at football games, I don’t know that you see a lot of young people. And, of course you can say that’s because it costs so damn much. And that’s part of it, too. But I think that there are a couple of generations, like I said, that don’t sit and watch a lot of television.

Instead, they follow it through their phones: If you can get the scores, get the stats, the fantasy football  — you can get what happened in a game. There are ways that you can watch it quicker and not spend that much time. 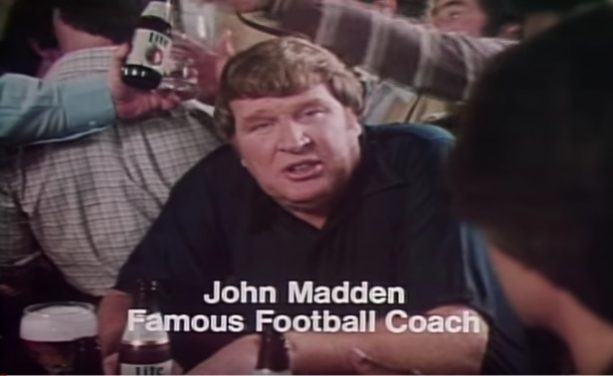 Another big issue right now is the NFL cracking down on celebrations and personal displays. What are your thoughts on that?

I think that they just want to keep them under control. That’s the idea. I mean, celebrations are good, but it’s still a team game.

It’s about your team. And then that’s the thing that should be celebrated. Maybe that’s old school, old-fashioned, get off my lawn crap. But at the same time, it’s not an individual game. And I think that if they let stuff go– you know everything is on television. Everything they do that’s outrageous makes all the highlight films.

Everyone sees it immediately. So players see it too and it’s a copycat league. So a guy says — ‘Geez, I like his celebration. I’m gonna get one like that. But I’m gonna get a better one.’

And pretty soon the dish runs away with the spoon, and you have no control over anything. And I think that’s what they’re trying to do. I mean a single guy celebrating is fine — just watch out for the aggressiveness. Watch out for unsportsmanlike stuff. Don’t play off the guy that you just beat. And it should be that way.

So I think it’s not to get rid of celebrations. I think it’s just build a fence around them, if that makes any sense.

Totally. You mentioned you’re on a number of different committees. Is there any particular rule change that you’d like to see the NFL push in the next couple years?

You know I think that we’re slowly getting out of hand [with rule changed]. It’s a problem we have and we had a conference call yesterday talking about this. Talking about we have more shoulder injuries and we’re talking about improving the shoulder pads.

And I said, well, we have to watch out, because sometimes we improve things so much they become a weapon. That’s what happened with the helmet. The helmet at one time was a leather helmet and no face mask.

And I think that’s what we have to watch out for. When we go for equipment changes, we can’t create weapons. Maybe we have to start taking some bars out of the helmet, and so on. 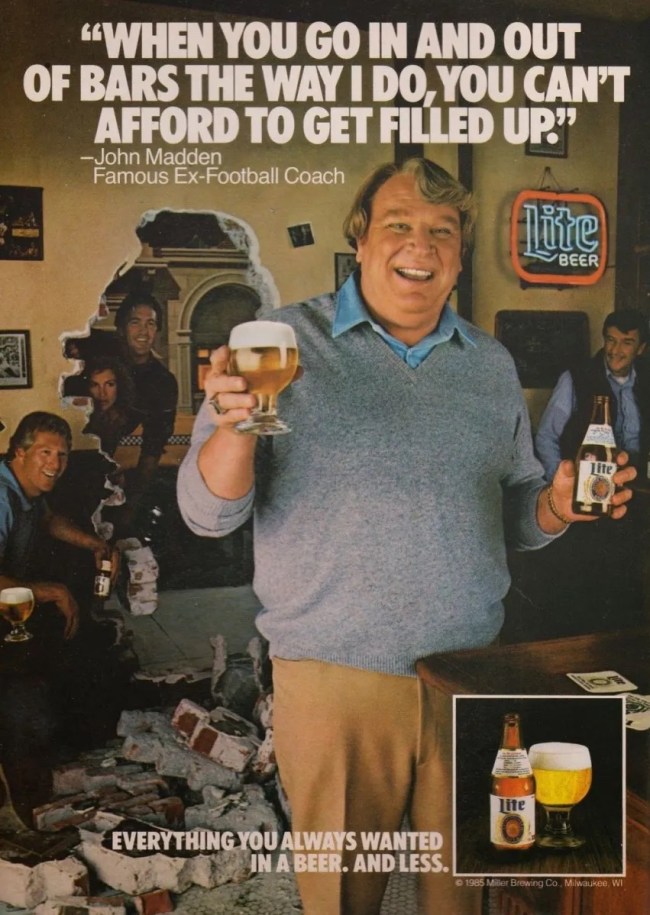 How do you think Roger Goddell has weathered the various storms going on in the NFL? Anything from Tom Brady’s suspension, to the concussion issue, to ratings, etc. How would you rate his job performance?

I mean he’s dealing with so many things. You know, like getting good games on Sunday night. And then do doubleheader games, and trying to get good games. And then Thursday night. Plus injuries — there are so many things out there that people throw on him.

The game changes. And there are certain things that you have to admit that go on. You just have to just get your arms around it. Because it’s a very tough situation.

They just had a meeting in Houston. And those are the things that they talk about as a group, the commissioner, and the league office, and the owners try and direct the direction where they want to go.

What’s your involvement, still, in the video game? From a production standpoint, are you still involved with the Madden franchise on a yearly basis?

We just talked about it yesterday. I have kind of the same responsibility that I’ve always had is– you know when we started out the motto was “If it’s in the game, it’s in the game.” And so that’s what I add — the way the game is played, because I watch all the film.

I make sure that we have those same plays, those same rules, those same everything in the video game that an NFL game has. So that’s what I do with them. And we’re going to have a meeting on that next month.

One very last question. As Madden himself, do you have a favorite Maddenism in Madden?

I don’t have a favorite. I try, but — we went through so many generations of new ones.

The Maddenisms change with the times. And — oh, hell, I don’t have a favorite.