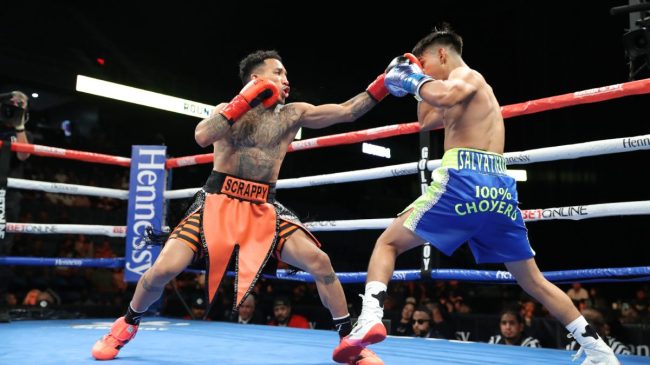 John “Scrappy” Ramirez put on an absolute show on Saturday night in his matchup against Jan Salvatierra. He ended the night with some major fireworks following a vicious knockout blow.

Ramirez set off a deadly combination of punches, with the final blow sending Salvatierra flying through the ropes and out of the ring. Salvatierra had to have his lifeless body pulled up by a photographer before he eventually regained consciousness. And luckily so. Had he fallen backwards to the floor, more damage could’ve been done.

Check out the brutal knockout below.

HE KNOCKED HIM OUT OF THE RING 😱

Ramirez catches Salvatierra with some quick hands, putting him on the floor early.

When his opponent was finally able to step back into the ring, the fight was called and Salvatierra was handed an L.

Another video of the knockout shows just how quick the boxer tumbled following that two-punch combo.

After the bout, Ramirez commented on the powerful punch that ended the fight.

“He made a mistake and he had to pay. He was not on my level.”

Brutal words adding insult to injury. But it appears to be true. The fight wasn’t even through the first round before Ramirez made quick work of Salvatierra.

He now improves to 10-0 as a boxer, with eight of those wins coming by way of a knockout. Now, he’ll turn his attention to a potential championship bout versus WBC junior bantamweight titleholder Jesse Rodriguez.

If he continues putting out performances like this, a championship belt might be in his very immediate future.