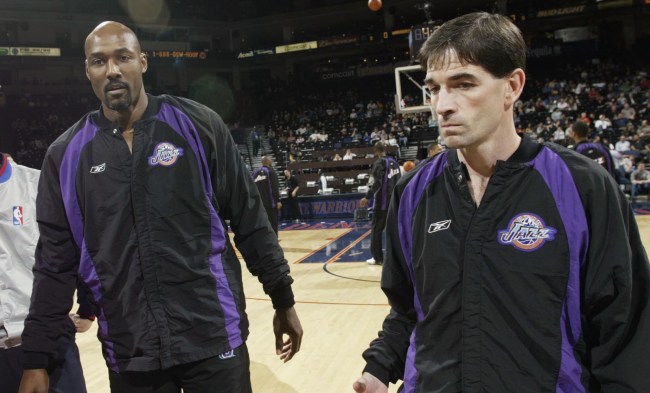 Utah Jazz Hall of Famer John Stockton retired from the NBA with a reported net worth of around $45 million. His partner in crime on the Jazz, and also a Hall of Famer, Karl Malone, reportedly has a net worth somewhere in the neighborhood of $75 million.

So, needless to say, they have more than enough money to stay up-to-date with all the latest technology. But they don’t.

Check out this photo snapped over the weekend by Malone’s wife Kay as one of the greatest NBA duos were taking in the Auburn vs. LSU football game.

This is nothing new for the two of them though. As far back as 2014 and 2015 Stockton and Malone were blowing the internet’s minds with their flip phone swag.

Now, some people might think that Stockton and Malone are just old fogies…

But I think this guy hit the nail on the head…

I think Karl Malone and John Stockton keep flip phones because they know a new pack of bloggers will have their minds blown by it each year.

BFF's John Stockton and Karl Malone text each other even though they're sitting next to each other… goddam Millennials (via mamail32 IG) pic.twitter.com/i1zFh2G5xj

I wonder if they text Tim Duncan on those phones too? You just know he’s got one as well.

And he doesn’t want to, either.