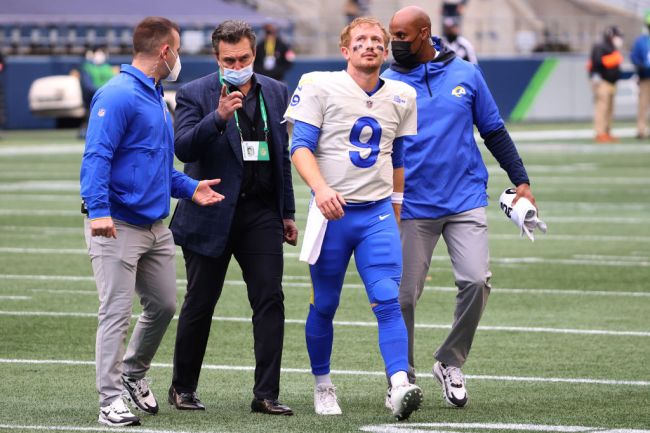 John Wolford was named the starting quarterback for the Los Angeles Rams’ Wild Card playoff game against Seattle on Saturday and exited early in the first quarter after taking a hit to the head and suffering a neck injury. The 25-year-old was announced as the team’s first-string signal-caller just minutes before kick off in place of Jared Goff, who received surgery on his throwing thumb less than two weeks ago. Wolford had served in the same role in a Week 17 win over Arizona.

With 5:40 remaining in the first quarter against the Seahawks, the former AAF and Wake Forest quarterback rushed for two yards on a designed run. Wolford was met by safety Jamal Adams as he went to the turf and took a shoulder to the head.

John Wolford is down after this hit from Jamal Adams.

The hit compacted upper body and left him down on the ground for a few moments before Los Angeles medical staff could tend to him. They immediately evaluated his neck and took him out of the game. Fortunately, Wolford was able to walk off of the field under his own power.

Jared Goff is now in at QB for the Rams after an injury to starting QB John Wolford. pic.twitter.com/HnPvplecyd

Adams, who made the tackle, took a knee on the goal line and said a prayer for his opponent. Rams wide receiver Cooper Kupp went over to Adams and pat him on the back, showing compassion around a scary moment and acknowledging his understanding that there was no intention with the hit. It was ruled to be a clean play and the initial penalty flag was picked up.

Wolford did not return to the game and was seen leaving the stadium in an ambulance to receive further tests. It was reported that he was able to walk himself to the ambulance before getting on the stretcher.

The concern is around the nervous system and the spine with a hit of such nature, and the medical team placed a cervical collar on his neck to immobilize the affected area as best possible. Imaging and evaluation at the hospital will look to rule out a cervical spine fracture. Medical staff will continue to monitor the situation for any developing neurological symptoms.