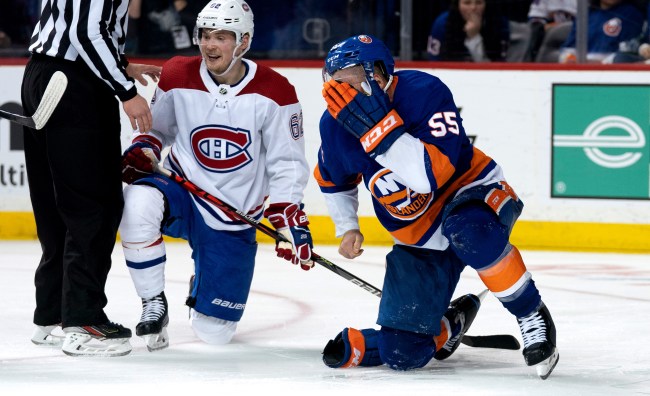 A scary scene in the NHL took place Tuesday night involving New York Islanders’ Johnny Boychuk when Canadiens winger Artturi Lehkonen fell in the crease and his skate blade slashed the defensman in the face.

Boychuk immediately put a hand to his left eye and raced off the ice, leading to speculation that the blade had grazed his eyeball.

Thankfully, that was not the case, but he certainly didn’t escape unscathed as Islanders general manager Lou Lamoriello reported on Wednesday that there was no damage to Boychuk’s eye, but it did require 90 stitches to close the cut.

“He felt the skate blade get his eye. But, fortunately it just got the eyelid. It took 90 stitches to fix, a plastic surgeon took care of it. I don’t want to exaggerate with the stitches because they do very small stiches, but there were 90 of them. He’ll be fine,” said Lamoriello.

Boychuk Injury Update from Lou Lamoriello: “Johnny Boychuk is ok. Fortunately the skate blade just got the eyelid. It took 90 stitches for a plastic surgeon to fix. But he’ll be fine.” #Isles pic.twitter.com/vYfsx9MAYO

Don’t know about you, but 90 stitches is 90 stitches so he needn’t have worried about “exaggerating.”

Boychuk’s teammates were certainly very concerned about his well-being in the locker room after the game.

"Your heart kind of stops. It's a dangerous game at times. Your mind is on him the rest of that night. It was great to hear after the game that he was doing better and it's not nearly as serious as it looked. Regardless it's a scary situation." - Anders Lee on Johnny Boychuk pic.twitter.com/N8XFxTIkur

"You never want to see that happen to anyone. We were all really worried about him. After the game he sent a nice text to all of us. Definitely happy to see him doing well." - Josh Bailey on Johnny Boychuk pic.twitter.com/m7sdmYOSQZ

Boychuk’s brother David, who played in the WHL, also shared on Twitter his thankfulness that things turned out okay…

Really tough to see a loved one involved in a scary moment like tonight. Thankful for the big guy looking out for JB tonight #Isles #Boychuk 🚀 🚀

And in true hockey fashion, he made light of the frightening injury.

Amazing. We almost had another Clint Malarchuk-type situation and they’re cracking jokes.