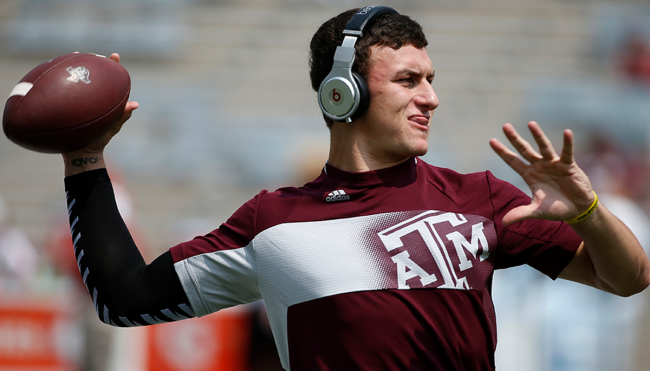 When Johnny Manziel declared for the NFL Draft after winning the Heisman Trophy at Texas A&M, there were plenty of people who were concerned his penchant for partying could have a detrimental impact on his performance on the field and oh boy were they right.

At the end of what would end up being his final season with the Browns, Johnny Manziel was slated to receive treatment for a concussion in Cleveland but decided to take a trip to Las Vegas the same weekend, where he was faced with what would inadvertently be the most important decision of his life.

After weighing his options, the quarterback decided the best course of action would be to throw on a fake wig and hit the tables the night before the last game of the season. That fateful choice would play a role in the franchise’s decision to release him a few months later, which brought his NFL career to an end and cemented his status as one of the biggest “What If?” stories the football world has seen since JaMarcus Russell.

Manziel would eventually reveal he had struggled with substance abuse issues since his time playing at Texas A&M, where he said he frequently turned to drugs and alcohol to cope with the stress of being thrust into the national spotlight and “self-medicate” in an attempt to address the mental health issues he grappled with.

Johnny Football routinely went hard while hitting the town in College Station, including the night where he decided to throw on a Scooby-Doo costume and make the rounds before the pictures shockingly went viral after surfacing.

Johnny Manziel should win the heisman because he's Scooby doo and he straight gets it. pic.twitter.com/qheQGaGqEM

During a recent appearance on the Ball Don’t Lie podcast, Manziel sat down to reflect on that night and some of the others that led to some particular brutal mornings while revealing Kliff Kingsbury was forced to turn to some incredibly tough love to make sure his quarterback showed up to practice regardless of his condition.

You all know the legendary Halloween story, but @JManziel2 has more…

“It was Halloween and I went out. One of my boys had a Scooby-Doo costume and I wore this thing full-blown to the bars. All night, I took pictures with girls…

I may or may not have pulled the old ‘My Alarm Clock Didn’t Work’ the next day. Kliff Kingsbury, being the OG he is, already knows what it is. He’s too hip to the game to not know I’m f—kin’ big-dogging it around town the night before.

He had a guy who was our offensive assistant at the time. He would come to my house and literally scoop me out of bed and throw me over his shoulder and in the front of his truck to drive me to the facility. I went out to walk-through like nothing happened.

I remember this one day I’m running outside and puking my ass off and coming back right before the first snap of offensive four plays. It’s crazy that I had this mindset that I played better the harder I partied.”

It’s good to hear it seems like Manziel has finally realized the error of his ways. It’s just a shame it took as long as it did.