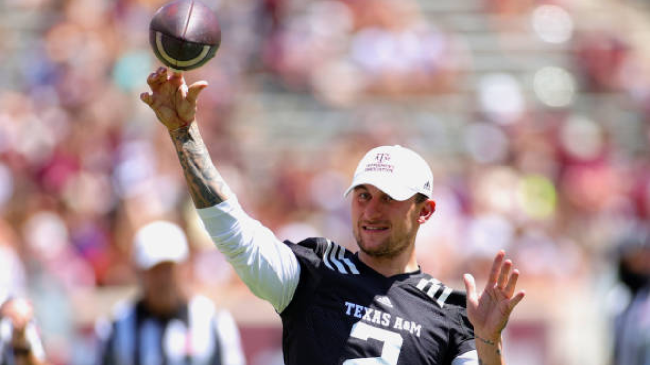 A year that began with such promise has already taken a negative turn for Texas A&M today. Following a shutout win over Sam Houston State in Week 1, the Aggies were set to host Appalachian State in a matchup where they were expected to win with relative ease.

Instead, Appalachian State never trailed in the game as Texas A&M’s offense failed to get anything going. The Mountaineers won the game 17-14, leaving the Aggies to regroup and figure out how to turn things around quickly enough to keep the College Football Playoff as a possibility.

It turns out one of their former players has an idea of how they can turn things around. Former Aggies quarterback Johnny Manziel tweeted after the game checking in on whether or not he had a couple of years of eligibility left to suit up for Texas A&M.

Johnny Manziel was an absolute phenom over 2 years at Texas A&M, posting 7820 yards and 63 touchdowns and winning the Heisman Trophy before heading to the NFL.

Unfortunately, he never quite panned out once he reached the league, lasting only two years before he was out of the NFL. He has since resurfaced in other leagues, most recently playing in the Fan Controlled Football League.

Given the state of Texas A&M’s offense Jimbo Fisher might not be opposed to the return of Johnny Manziel. The team only managed 97 passing yards against Appalachian State after they gave up 352 to North Carolina last weekend.

The team has a tough schedule head of them with Miami, Arkansas, and Alabama all scheduled in the next 4 weeks. They’ll need to get their issues figured out quickly or their record could look pretty bad by the middle of October.

Maybe Johnny Football can come along to help them out.