XFL Commissioner Takes A Direct Shot At Johnny Manziel And Trent Richardson, Says His XFL Players Are Better Than Them 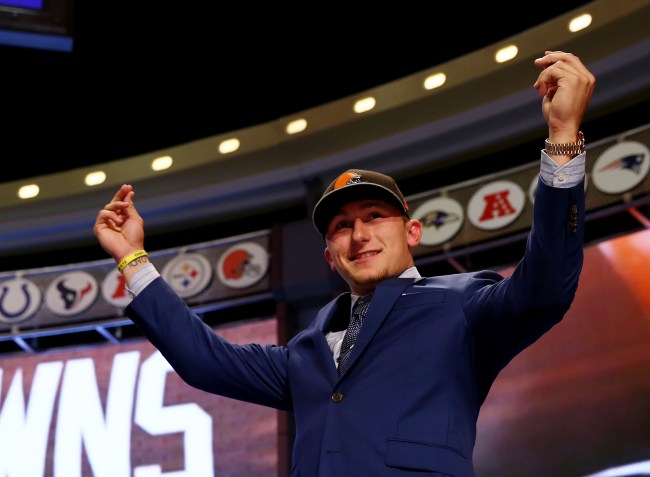 When the XFL 2020 held its initial player draft back on October 15th a lot of football fans were shocked that Johnny Manziel‘s name wasn’t called by any of the new XFL teams. The same is true for former University of Alabama running back Trent Richardson who was a Heisman finalist in 2011 and was the #3 overall pick by the Cleveland Browns.

To most fans, it seemed like a no-brainer. Johnny Manziel had NFL and CFL experience. Trent Richardson played for the Browns and Colts before moving to an offseason/practice squad role with other teams and then moving to the CFL. These are big names with professional football experience and that seemed to make perfect sense for the XFL 2020.

Well, it turned out that Johnny Football didn’t enter the XFL 2020 Draft Pool and wasn’t available for teams to draft. Furthermore, according to reports, there wasn’t any real interest from XFL 2020 teams in drafting Manziel.

This week, XFL 2020 commissioner Oliver Luck about why Johnny Manziel and Trent Richardson weren’t given consideration and he straight up said his XFL players are better than those guys.

It’s an extremely direct comment in a world where people are usually pretty evasive with answers to questions like this. The TB Times asked Luck why they aren’t on an XFL team, here’s his answer:

I would argue that the players we have are better than those guys, to be honest with you. Johnny has his own history, and we have coaches from the CFL (Canadian Football League) who have seen him close up. I watched Trent when he was with the Colts, and I watched him when he was with the AAF. He was in the draft pool. Coaches and scouts looked at him and didn’t think he was going to help their team. I think the guys we have on our teams are the best 560 that aren’t playing in the National Football League. (via)

When asked about his feelings on Colin Kaepernick, the commissioner gave his shortest answer of the interview and said “I think his salary demands are way out of our ballpark. He was never really a viable option” which is a perfectly reasonable answer to that question without getting political in any way.

The Tampa Bay Times pointed out to the commissioner how the biggest names in the XFL 2020 appear to be the coaches and how that lack of star power was obvious. Here’s what he had to say about that:

That’ll begin to shift a little bit. I get the sense that a couple of the guys I was really excited to be able to sign, like Cardale Jones, who’s playing in D.C., has the potential to have a great season, really kick butt and do well. This is sort of a moment where either he makes it or doesn’t. There’s drama there. I think there’s a handful of guys like that.
But I also believe that you don’t need star players to play good, entertaining football. I always compare it to college football. A lot of people go to college games and enjoy it. There might be an NFL-caliber guy on the field or two or three, but you don’t need an Odell Beckham Jr. making a one-handed grab. (via)

It will certainly be interesting to see how the XFL 2020 pans out. I wish I could get more excited about it but my home team Tampa Bay has the most hideous uniforms I’ve ever seen in professional sports and I don’t think I’ll be able to watch their games without feeling physically ill.

The commissoiner also touched on sports betting with an interesting discussion there. You can read the full interview in the Tampa Bay Times by clicking here.