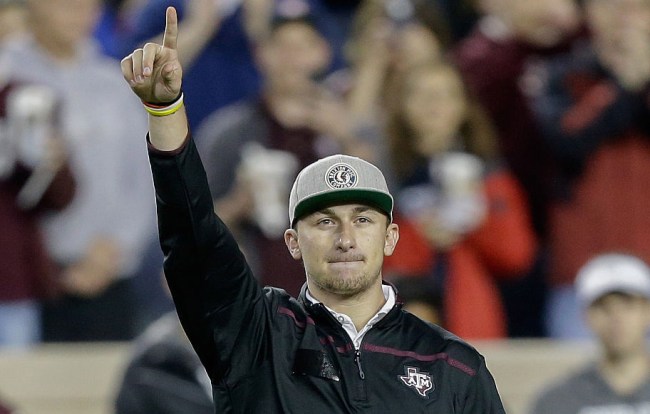 Before being selected 22nd overall by the Cleveland Browns in 2014, Johnny Manziel visited the New England Patriots for a mild tour of the Patriot Way.

In his new Comeback SZN podcast, the now backup for the CFL’s Hamilton Tiger-Cats candidly described his visit to Foxborough. His first predicament came in the form of a wine bottle at the hotel the team put him up in. Manziel claims he tried to open the bottle without an opener and ended up turning his hotel room into the war scene.

“I remember calling (agent Erik Burkhardt) and being like, ‘Do you think the Patriots are going to get the report of what standing this room is in by the time I check out of here, because it’s gonna take me at least a day and a half to clean the shit off the walls, off the ceilings, the new bed sheets, everything.’”

Johnny then recalled the moment Gronk catching wind he was in town. Manziel paired with Rob Gronkowski is the human equivalent of pairing Coca-Cola with Mentos (the freshmaker).

“After that failed attempt to try and be on the good side of my visits, I get a FaceTime from Gronk,” Manziel said. “As I answer he’s like, ‘You’re here for your visit, I just saw on Twitter. I’m outside your hotel. I just got out of practice, you want to hang out?’ That escalated probably a little bit more than just having a bottle of wine in the hotel room. For as big as he is, that guy can actually play some ping-pong, I was surprised … and maybe drink a couple beers.”

Oh, to be a fly on the wine-stained wall of that drinking sesh.