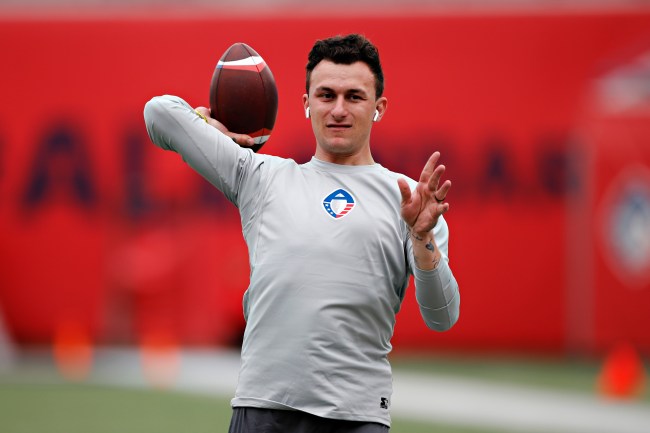 Johnny Manziel‘s days in the NFL were shortlived. He was the former #22 overall pick in the 2014 NFL Draft but went on to only throw 7 touchdowns and 7 interceptions before he was released by the Cleveland Browns on March 11, 2016.

Johnny Football’s time in the NFL was overshadowed by news about his antics. It started with a $12,000 fine for a ‘hand gesture’ in a preseason game against the Washington Redskins. A fellow player called Manziel’s rookie campaign a “100% joke”. He started the next preseason injured, played some, was eventually demoted to third-string, and then cut where he’d go on to spend a few years in the Canadian Football League and AAF.

The 2012 Heisman Trophy recipient’s professional career has disappointed a lot of fans who expected him to go onto do great things in the NFL and I’m sure Johnny saw his career going wildly different in his mind but that’s neither here nor there now because we’ve reached the point where JFF can at least laught about it.

The replies are pretty in line with what you’d expect to see:

Naw it was as good as your football whole football career:
U started on the top, then tried to be cool, then failed

Can’t make fun of him if he makes fun of himself first. Good advice agent. pic.twitter.com/yOeBIgKwF1

Maybe if you’d spend more time in the weight room and less time swimming, you’d be in the league. As a youth football coaching legend, I forbid my players from ever learning how to swim because they need to focus on football.

A live shot of being a Browns fan since 99 😂

I genuinely respect the self-roast.

Johnny’s only 27-years-old and would’ve been entering the prime of his NFL years if he were still in the league. I have no idea what he’s up to these days but it’s amazing we’re still talking about him when he hasn’t taken an NFL snap in years.