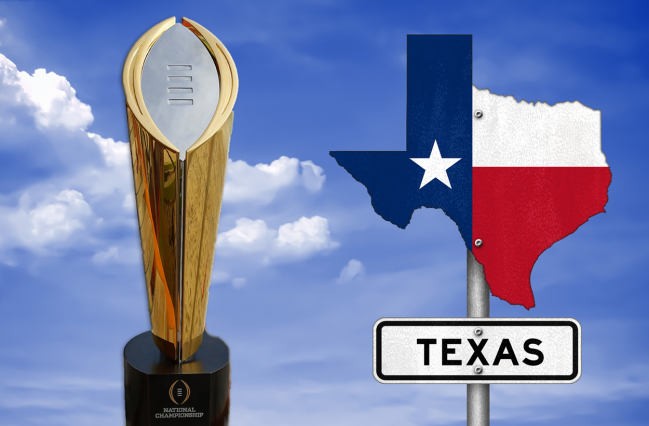 Neither Texas nor Texas A&M have had a lot of success on the gridiron in recent years. The two Lone Star State football programs have been consistently in the mix at very points of time, but neither the Aggies nor the Longhorns have been able to reach the mountaintop over the last decade (plus).

Both schools hope that is soon to change.

Texas A&M, which paid Jimbo Fisher a gargantuan amount of money in 2018, finished the 2022 recruiting cycle with the highest-ranked class in history. The clock is now ticking for those recruits to make an immediate impact and win more than nine games since 2012 and just the once since 1998.

Texas, which is entering its second year of the Steve Sarkisian era, finished with a top-five recruiting class and brought Quinn Ewers home to play quarterback in the future. The Longhorns, specifically Sam Ehlinger, declared they were back after winning the Sugar Bowl in 2018 but have won double-digit games just the once since losing in the BCS National Championship 2009. They are hoping that this is the year things start to turn back toward an upward trajectory.

While this year is important, continued success both on and off of the field is the goal for Texas and Texas A&M football— obviously.

A big part of that is recruiting and both schools are tearing things up in that area. NIL opportunities likely have a lot to do with the success of both schools, despite the ludicrous narrative Fisher might try and spin, and it is working.

Right now, at this very moment, both schools are battling it out for one of the state’s top players. Johntay Cook is a four-star wide receiver, the No. 7-ranked player at his position and the No. 6-ranked player in Texas.

He has more than 20 offers, but his decision seems to be down to the Aggies and the Longhorns. While Cook has more than six months to decide on where to play, should he choose to wait that long, he might decide to verbally commit before the fall.

Either way, he was recently on campus at both schools and called them out for their lack of football trophies. It started at Texas last weekend and he called the Longhorns out for displaying all kinds of swimming trophies.

this is actually hilarious pic.twitter.com/AAHWl3FsFK

Cook’s initial clip quickly went viral but he kept the same standard in College Station over this pas t weekend. He called out the Aggies for showing off all kinds of broadcast awards but nothing related to football.

Aggie Showing off Sports Emmy Awards “where are the sports trophies at?” Johntay “ I still ain’t seen no football trophies” 😂😂😂😂😂 pic.twitter.com/xhvCKmVtBH

Cook clearly isn’t particularly concerned with the lack of trophies, because he is likely going to commit to one of the two in-state schools. Perhaps he wants to be a part of a group that brings more trophies back to either program.

Nevertheless, calling the schools out for their lack of trophies is not common from recruits and it is particularly hilarious and savage.