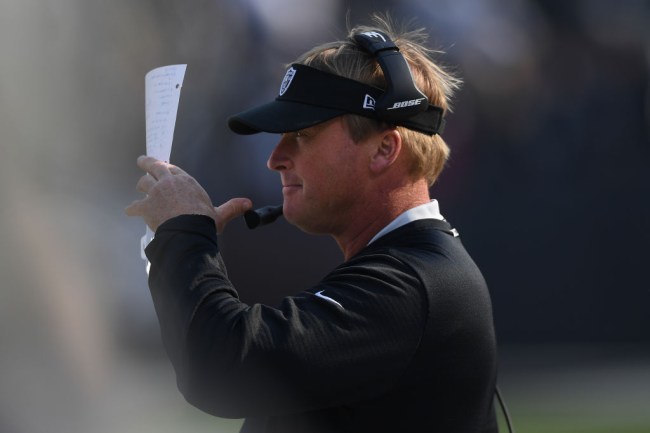 I love my dad. He’s afforded me countless opportunities, many of which I’ve squandered, and has instilled in me some invaluable life lessons. With that said, if Jon Gruden called me up and offered to adopt me, I’d have to pack up all my shit, kiss my father on the forehead, ride off into the hand-me-down car my father bought, and do what’s best for me.

The Raiders head coach is one of the most charismatic, borderline insane figures in the NFL. Gruden hasn’t had many opportunities to display his electric personality, as his Raiders are 4-11 and currently reside in the basement of the AFC West. A 4-11 record is actually encouraging when you consider the Raiders began the season 1-8.

Their biggest win of the season came on Monday Night Football against the Denver Broncos on Christmas Eve, when Gruden’s squad handily beat Denver 27-14. The greatest part about the win was that Gruden was mic’d up during the game, putting his quirkiness on display for the world to see.

Has a coach ever told his players he loves them more than Jon Gruden. As an adopted son, I look forward to being showered with “I love yous” as I sit home and spend daddy’s money.