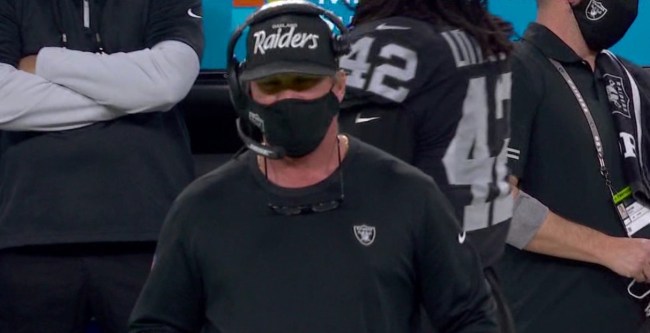 Las Vegas Raiders head coach Jon Gruden had a bit of a uniform snafu on the sidelines on Thursday night.

During the team’s game vs the Chargers in Las Vegas, Gruden was seen wearing an Oakland Raiders hat by NFL fans on social media

According to Erin Andrews the team said they must have had the old hats in rotation and quickly corrected the situation when they realized Gruden was wearing the wrong hat.

NFL fans had plenty of jokes about the Gruden hat situation.

Hey @Raiders someone needs to get word to Jon Gruden that he is on NATIONAL TV with an Oakland Raiders hat on. Come on man! #vegasstrong

@Raiders head coach Jon Gruden is wearing an Oakland Raiders hat on the sidelines. He must have forgot that the team had moved from Oakland to Las Vegas

Someone needs to remind him they aren’t in Oakland anymore. 😂😂#LACvsLV pic.twitter.com/GKdbmZy3ow