Jon Gruden On His Brother Jay Getting Fired: ‘Welcome To The Club, Bro!’ 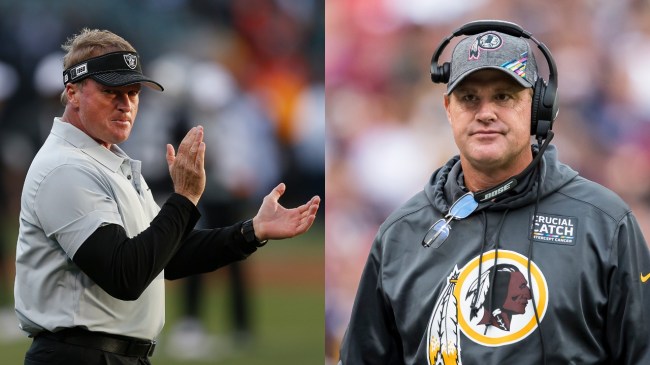 After five long and probably grueling seasons, Jay Gruden was finally put out of his misery as he was finally fired by the Washington Redskins.

Hired in January of 2014, Gruden went 35-and-49 during his five years as Redskins head coach, making the playoffs just once (in 2015 when they won the NFC East with a pitiful 9-7 record).

Never winning more than nine games in a season, the wheels really fell off the wagon for the younger Gruden this season, as the Redskins currently sit at 0-and-5 and genuinely look like one of the worst teams in the National Football League not named the Miami Dolphins.

However, Jay is far from being the first member of the Gruden family to be fired from their National Football League job, as he was fired as head coach of the Tampa Bay Buccaneers over a decade ago.

Speaking to the media on Tuesday, the elder Gruden expressed that very sentiment, reminding his younger brother Jay that both he and his father Jim have been fired before him, thus welcoming him into the Club of Fired Grudens. A prestige club indeed.

Gruden wouldn't speculate on brother Jay joining him with Raiders. 'Got a lot of respect for my brother obviously and disappointed for him getting fired. But my dad's been fired, I've been fired, Jay's been fired. Welcome to the club, bro.' #RaidersNation

While Gruden refused to indicate whether or not Jay would be joining his Raiders staff, we all know its only a matter of time until the Brothers Gruden link up for NFL domination. All we need them to do is hire the Ryan Brothers and then we’ll really be cookin’ with gas.