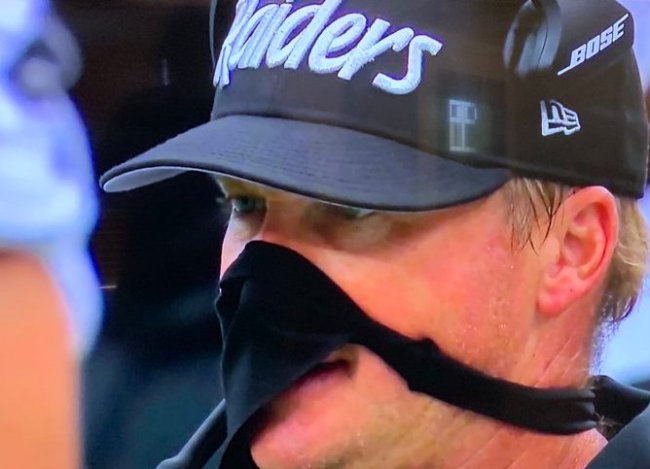 Jon Gruden was told by the NFL he had to wear a mask on the sidelines during games. The Las Vegas Raiders coach opted for the smallest mask possible.

Twitter is having a grand old time pointing out the mask looks a hell of a lot like a pair of women’s underwear.

Gruden’s mask has become just an eyepatch at this point pic.twitter.com/TGo5lSrdde

Gruden out here wearing a g-string for a mask.😂 #RaiderNation #NFL pic.twitter.com/BuGEcOmGRn

Gruden is wearing a thong for a mask.

Gruden with stripper panties on his face.

Jon Gruden is using a torn off t-shirt sleeve as a mask. He is mocking you .@NFL.

I need a pic of Gruden’s mask. I think he’s eaten half of it

Gruden was fined $100,000, and the Raiders were handed a $250,000, for his failure to wear a face covering at all times during last week’s win over the New Orleans Saints.

The Saints were also fined.

It will be interesting to see what the league says about Gruden’s Victoria’s Secret inspired face gear.