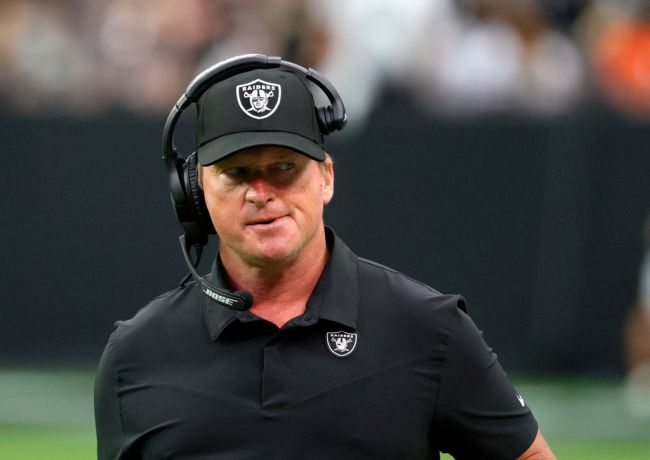 Jon Gruden is again in hot water after more of his old angry emails have resurfaced.

Last week, it was revealed that Gruden bashed NFLPA exec Demaurice Smith by mocking the size of Smith’s lips which many felt was racist.

On Monday, the NY Times obtained more emails from Gruden that show the Raiders coach using misogynistic and homophobic language.

league officials as part of a separate workplace misconduct investigation that did not directly involve him have found that Gruden, now the coach of the Las Vegas Raiders, casually and frequently unleashed misogynistic and homophobic language over several years to denigrate people around the game and to mock some of the league’s momentous changes.
He denounced the emergence of women as referees, the drafting of a gay player and the tolerance of players protesting during the playing of the national anthem, according to emails reviewed by The New York Times.

In the emails obtained by the NY Times, Gruden used homophobic slurs while going off on Roger Goodell for pressuring Rams head coach Jeff Fisher to draft “queers.”

Gruden’s messages were sent to Bruce Allen, the former president of the Washington Football Team, and others, while he was working for ESPN as a color analyst during “Monday Night Football,” the sports network’s weekly prime-time telecast of N.F.L. games. In the emails, Gruden called the league’s commissioner, Roger Goodell, a “faggot” and a “clueless anti football pussy” and said that Goodell should not have pressured Jeff Fisher, then the coach of the Rams, to draft “queers,” a reference to Michael Sam, a gay player chosen by the team in 2014.

In numerous emails during a seven-year period ending in early 2018, Gruden criticized Goodell and the league for trying to reduce concussions and said that Eric Reid, a player who had demonstrated during the playing of the national anthem, should be fired. In several instances, Gruden used a homophobic slur to refer to Goodell and offensive language to describe some N.F.L. owners, coaches and journalists who cover the league.

Just this weekend Gruden issued an apology for his language in the emails before the latest leak.

Jon Gruden said earlier today that he’s “learned a lot” from the reaction to his racist email that was made public on Friday. This was before the latest batch of emails that were just released.

According to ESPN’s Adam Schefter, the NFL is currently monitoring the situation.

These were the emails the league sent to the Raiders, per source. NFL waiting to see how Raiders handle. https://t.co/LlhcOLi4kt