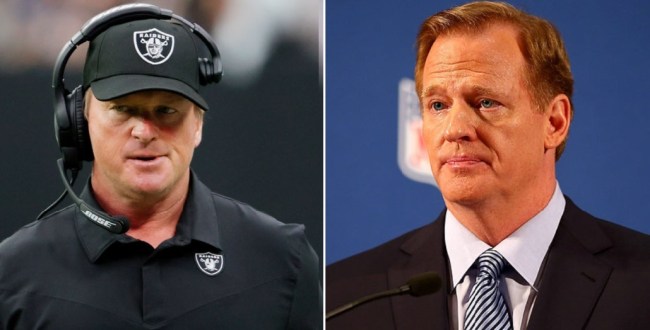 Former Las Vegas Raiders head coach Jon Gruden is officially firing back at the NFL months after an email scandal cost him his job.

According to the Las Vegas Review-Journal, Gruden’s lawyers have filed a lawsuit accusing the NFL and Roger Goodell of deliberately attempting to destroy his career by leaking his racist, homophobic, and misogynistic emails obtained during the WFT workplace investigation.

“Through a malicious and orchestrated campaign, the NFL and Commissioner Roger Goodell sought to destroy the career and reputation of Jon Gruden, the former head coach of the Las Vegas Raiders,”

The 21-page complaint says that Gruden was “forced to resign” when the league continued to leak his emails to the media.

“When their initial salvo did not result in Gruden’s firing or resignation, Defendants ratcheted up the pressure by intimating that further documents would become public if Gruden was not fired,d. “They followed through with this threat by leaking another batch of documents to the New York Times for an October 11, 2021 article. On October 7, 2021, Jon Gruden was the head coach of the Raiders on a 10-year, $100-million contract. By October 11, 2021, he had been forced to resign.”

It is worth noting that several NFL insiders, including Pro Football Talk’s Mike Florio, believe the NFL leaked the emails that got Gruden in trouble.

The NFL has been adamant that they didn’t leak Gruden’s emails.

The NFL says it did not leak the emails that led to Jon Gruden's resignation and engulfed the sport in controversy. On Tuesday, Tanya Snyder told fellow NFL owners that she and Daniel Snyder are not responsible for the leaks. With @NickiJhabvala…. https://t.co/jlfZ2ho0Vd

It’s going to be interesting to see how this lawsuit plays out.