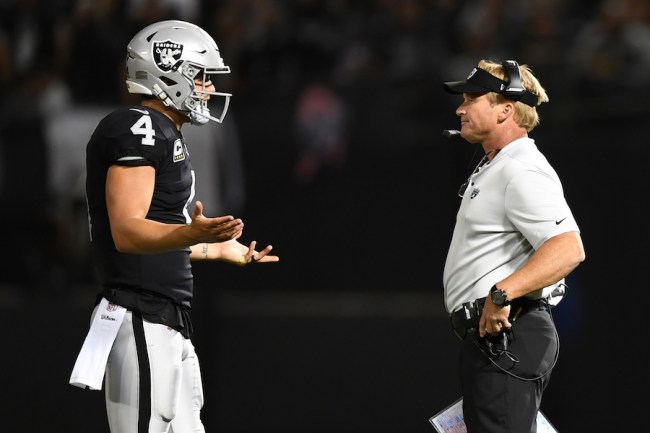 With empty stadiums across most of the league this past weekend, players and fans could hear NFL players trash-talking opponents, congratulating teammates, and even calling out plays.

Even the coaches were experiencing the new sounds of NFL Sunday without fans for the first time. Raiders coach Jon Gruden was able to hear his Derek Carr call audibles at the line of scrimmage, and thought he was hearing wrong when his quarterback name-dropped Gruden’s wife before a play.

“Derek used my wife’s name on TV in one of his audibles, so it must not have been too loud in there. I’m still trying to figure out why Cindy Gruden’s name came up during the game. I’ve got to look into that. . . .”

This might not even be the first time Cindy Gruden was used to call an audible. Gruden joked that it will most likely be the last time.

“Unfortunately for me,” laughed Gruden, “I could never hear him until yesterday. So I don’t know what he’s been up to at the line of scrimmage, but he better keep my wife out of it from now on.”

Gruden told Hill that everything will have to change in the coming weeks, but not because of his quarterback’s performance, but because teams can easily study gameday film without crowd noise.

Maybe that’s who Gruden was on the phone with during halftime – a pissed off Mrs. Gruden.