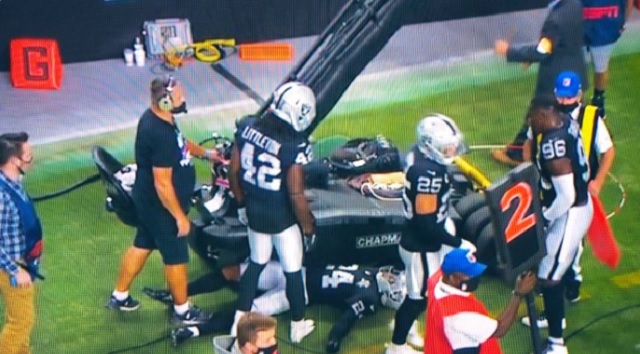 During the Monday Night Football broadcast, Raiders LB Johnathan Abram ran into a TV cart on the sideline while attempting to make a tackle. Abram laid motionless during the TV timeout before running back to the Raiders sideline.

how about move the cart back?? pic.twitter.com/N8deuULBMK

How Jonathan Abrams gonna get stuck under the cart 🤔🤔 , 2020 weird. #MNF pic.twitter.com/AeO7JfCytk

Thankfully Abram was able to get up off the field on his own accord despite how scary the injury initially looked.

Good Sign: Johnathan Abram’s got up and ran to Raiders sideline.

Football fans were angry about the placement of the TV cart.

Maybe move that tv cart back a few feet

Johnthan Abram just went full speed into a tv camera cart. Which brings up the question…. why the hell is that cart so close to the field?

Good lord what was that cart doing there.

That TV cart should not be there. Not sure how the issue of that was never raised. Seemed way to close to the field.