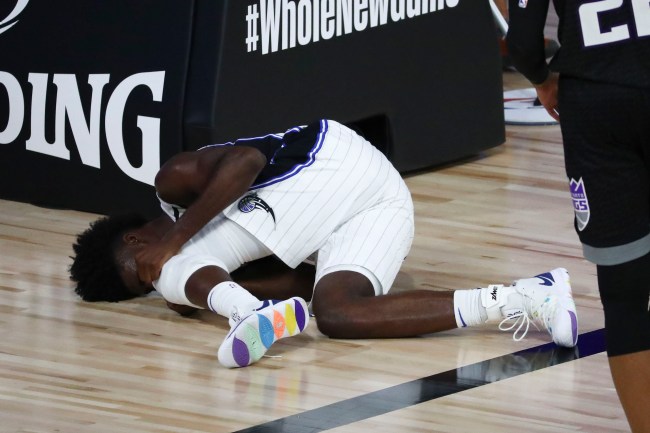 During the Magic’s game against the Kings, Isaac’s knee seemed to buckle while he was driving to the hoop late in the game.

ESPN’s Adrian Wojnarowski reported that Isaac suffered a torn ACL and would be out for an extended period of time.

Disappointing news: Orlando Magic F Jonathan Isaac has suffered a torn ACL in his left knee, source tells ESPN. Isaac missed 31 games with knee injury earlier and worked his way back for restart. A much longer rehab awaits him now.

Despite the seriousness of the injury, several NBA fans celebrated Isaac’s injury because he had decided to stand during the anthem a few days ago.

Jonathan Isaac.. for those that don’t believe his injury IS KARMA are blind.. that was definitely Karma and KARMA IS REAL.. whatever you want to define it as.. it is what it is BUT IT WAS KARMA..

next day he tore his ACL.

Allah: I guess you don’t need that knee?

Thankfully there were plenty of fans who admonished those who were giddy about Isaac’s knee injury.

Everyone that is laughing at or saying Jonathan Isaac getting injured is "karma" is straight up trash.

I don't usually say stuff like this, but if you feel that way, and you follow me, hit the unfollow button.

Prayers up for Issac.

Saying that Jonathan Isaac having a torn ACL and him not kneeling was karma is a nasty way to view it. This isn’t a joke. Hoping that he recovers soon.

.@kayte_c has a message for those who said Jonathan Isaac's injury was karma pic.twitter.com/WhW9XlsIR7