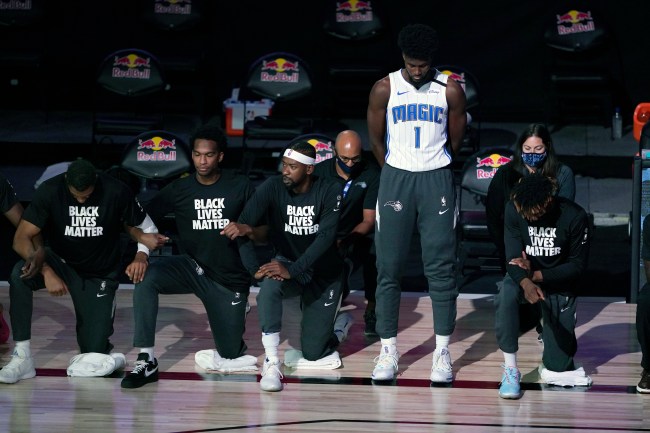 Just a few days ago Jonathan Isaac was a relatively unknown player on the Orlando Magic but he has become a fan favorite among a certain section of the population nearly overnight.

On Friday, Isaac became the first NBA player to stand for the national anthem during the NBA’s season restart in Orlando. Isaac also chose to not wear a Black Lives Matter shirt during the anthem as well.

Jonathan Isaac is the first player during the restart to stand for the National Anthem.

All the remaining coaches, players, and members of both teams took a knee. pic.twitter.com/i2yy8qCPn3

After the game, Isaac Isaac cited the gospel and Jesus Christ as the reasons why he chose not to kneel or wear a BLM shirt.

“Absolutely [I believe] that Black lives matter,” Isaac said. “A lot went into my decision and part of it is my thought that kneeling or wearing a black lives matter t-shirt don’t go hand in hand with supporting black lives.”

“My life has been supported by the gospel of Jesus Christ,” “Everyone is made in the image of God and we all share in His glory. Each and everyone of us each and every day do things we shouldn’t do. We say things we shouldn’t say. We hate and dislike people that we shouldn’t hate and dislike. And sometimes it gets to the point where we point fingers about whose evil is worse, and sometimes it comes down to simply whose evil is most visible. I felt like I wanted just take a stand on — I felt like we all make mistakes but I think the gospel of Jesus Christ is that there’s grace for us. And that Jesus came and died for our sins. And that we all will come to an understanding of that and that God wants to have a relationship with us.”

Two days after the Magic’s game on Friday Isaac’s jersey sales have skyrocketed on the NBA’s store. As of Sunday, Isaac has the second best-selling jersey on the NBA’s website behind only LeBron James.

Jonathan Isaac’s jersey sales have skyrocketed after he stood for the National Anthem.

He is now number two in jerseys sales among players only behind LeBron James. pic.twitter.com/1JLwEPtLG8

Of all active players, Jonathan Isaac has become the second most sold jersey on the NBA Store’s website, only behind LeBron James. pic.twitter.com/JGAs6fGsaY

Kind of will that people are rushing to buy Jonathan Isaac jerseys.